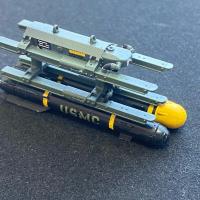 The Hellfire AGM (Air to Ground Missile) 114 was introduced in 1984. It was most associated with deployment on the Apache attack helicopter but has since been adapted for use from other aerial platforms including Unmanned Aerial Vehicles as well as ships and ground vehicles. Guided by laser or radar, this 100lb missile can travel a little over two miles and has proven to be highly effective at hitting its targets.

Hauler has produced a nice set here in resin and photo etch that includes two launch rails and eight AGM-114s. The launch rails build up from nine resin parts and four PE levers. Detail is excellent, especially the cable conduits and mounting lugs. The rails are cast to accept the missiles just like the real thing. Casting tags are continuous on the rails so you have to be careful removing them. Each missile consists of eleven parts. The fins are PE and the main ones have to be folded. The seeker glass is done in clear resin or resin caps are provided if you want to go that way. Decals are provided for a generic version or for those used by the US Marines. I’ve found decals from this company usually require some hotter setting solution so be ready for that. When complete, you have two fully loaded racks of Hellfire's ready to mount.

As always thanks to the vendor, Hauler for the sample product and to IPMS for allowing me and you to have a look.