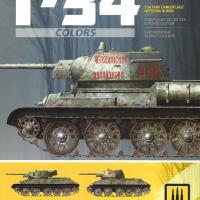 Since their founding in 2013, their mission has been to share the knowledge accumulated by Mig Jimenez, the founder of AMMO by Mig Jimenez, and the experience of AMMO's entire team of modelers, with the modeling community around the world. At AMMO by Mig Jimenez, they have a unique identity as the Weathering brand in the modeling sector, thanks to the fact that they are a company founded entirely by modelers. That passion for the hobby is reflected in all their products which always try to provide the best solutions for modelers. With 90% of their products manufactured in Spain, with high quality control and complying with all European standards, they offer the quality and safety that modelers demand for their projects. Additional books in this series include: Waffen SS Colors; Eastern Front – Russian Vehicles 1935-1945; and Sherman – The American Miracle.

T-34 Colors is one of the latest releases in the Camouflage Profile Guide Series. Of course, Russian Green is the standard color for Russian armor, but you will find some variation in the color illustrations. The Germans recovered many T-34 tanks from the battlefield and put them into service. What does stand out is the unit and individual markings. This book is a soft cover of 88 gloss pages (not including the covers). The front and rear covers feature color illustrations found inside the book. The front cover upper illustration can also be found on Page 60 as part of Tank Column “Chelyabinsk Collective Farmers”. This T-34 was transferred to the 121st Brigade in January 1943 before joining up with the 62nd A units that defended Stalingrad. This is but one of about 150 tank columns that were built through ‘fundraisers” from the working people. This tank column was from the Chelyabinsk tank factory where the workers donated money that helped build 40 tanks. I counted one color photograph and five black and white photographs. Plenty of the 255 color illustrations are side profiles but there are also many scrap color illustrations detailing markings. The contents include the following:

Daniele Guglielmi opens up with a T-34 history and technical data summaries of the two major variants. Keep in mind that the T-34 is not quite that simple as it was made in multiple factories and is second in total production [~ 84,070] only to the Soviet T-55 tank. That kind of volume led to a whole horde of variations. Additionally to the Soviet Union, T-34 tanks were manufactured in Czechoslovakia, and of course, many countries had modification centers where T-34 tanks were converted to better suit their needs. What I was surprised to learn was that the Germans actually manufactured T-34 tanks in captured Russian tank factories. Page 15 shows of two German acquired T-34 tanks in German camouflage.

The Polish People’s Army assembled in Russia and fought against the Germans. The end of WWII saw them representing 10% of the Allied forces operating against Berlin from the East. Page 35 represents Polish Panzer markings utilized in the Polish People’s Army. These markings appeared on the tank turret, anywhere from the gun mantlet to the rear side of the turret. Czechoslovakia operated ten T-34 tanks under the 1st Czechoslovak Tank Brigade. A special decree on September 30, 1943 named each of the ten tanks. Page 39 depicts two of them with the upper illustration showing “Lidice” and the lower illustration showing “Zizka” in the Autumn of 1943. There is a fairly good movie, Anthropoid, that describes the assassination of SS Reinhard Heydrich. One of the fall outs from his death was the total destruction of two Czech villages: Lidice and Lezaky. Global outrage followed with both Lidice and Lezaky becoming rallying cries. The T-34 with the Lidice inscription saw extensive combat against the Germans and is now on display in the Military Technical Museum in Lesany.

The Finnish Army operated several captured Soviet T-34 tanks, with two illustrated on Page 47. Originally these T-34 tanks were operated in the Russian Green camouflage they were captured in, but in the fall of 1943 a tri-color camouflage was applied. You may note the Finnish hakaristi (a reverse German swastika) that was normally painted in light blue with white edging. The Finnish hakaristi was originally a Hindu symbol of luck used by Swedish Count Eric von Rosen. He happened to donate a Swedish Thulin D aircraft to the Finnish Army in 1918 and it was later adopted as the Finish Air Force national marking in his honor. Of course, most T-34 tanks saw service in the Red Army, and the next 41 pages are devoted to their markings. A good example is depicted on Page 75 with two T-34/85 tanks of the 5th Guards Mechanized Corps.

I really enjoyed this book and its focus are the excellent color illustrations. It is a quick read and is valuable as a historical or modeling reference. My thanks to AMMO by Mig Jimenez, and IPMS/USA for the chance to review this great volume.