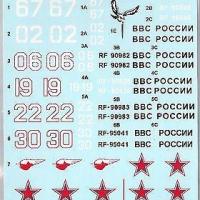 Please note that this product was provided to IPMS directly by Advanced Models. The product is available through “Victory Models”. Also, please note that at the time of writing this review the Victory Models website did not show a page for AMD 148022. There is another product that has decals for the Su-24M, that being item number 148021, which is covered in another revew.

The “Syrian Warriors Pt.1” decal package contains an Information Sheet, a decal sheet, and a set of paint masks. The Information Sheet included in the Decal package is in Russian and English. In some cases, decal sheets produced by companies that are not primarily English speaking can cause the modeler to rely on the images rather than text. That is not the case with A.M. Decals. While the English translation is a little stiff, it is very informative and not at all difficult to understand. English speakers won’t miss a word of explanation and information.

The Information sheet includes a paragraph providing the historical and political background, laying out how the “Air Force Group of Russian Aerospace Forces in Syria” was tasked with service in that arena. The Treaty of Friendship and Cooperation agreed upon by the “USSR” in 1980 laid the foundation for future coordination and cooperation between the USSR and Syria. On Sept 30, 2015, President Bashar Assadon requested military assistance from the Russian Federation and President Vladimir Putin consented to the use of the Russian Air Force in the territory of the Syrian Arab Republic.

The Information sheet points out that at the time of deployment some of the insignias and registration markings on the aircraft were over-sprayed. Images of the aircraft in service clearly show spots of light gray. The masks included by AM are provided to assist the modeler in reproducing these “patches” of paint.

The same is true of the White 08 markings. The “8” is surrounded by a red border, and, again, the red border has no noticeable deviation in its dimensions.

The ultimate test for any decal is, of course, application to the model. In order to “test” the AM decals, a piece of sheet styrene was cleaned and primed. The “test” decal, the manufacturer’s logo, was removed from the decal and submerged in distilled water. The water was a bit chilly, at about 60 degrees. After 90 seconds the decal willingly slipped off the backing paper without difficulty. Once the decal was applied to the sheet styrene, it was put under considerable pressure, using a tissue to squeeze out the water from under the decal. I was rather rough on the decal, moving it around a bit, and applying far more pressure and stress on it than I would on a decal being applied to an actual build project.

The decal did not show any sign stress or strain and snuggled down quite nicely. I did not trim the decal closely, before application, to remove the decal film immediately around the decal, and while it did not silver, the backing was noticeable. Were I to apply these decals to an actual build project I would, as I always do, trim the decal as close to the coloring on the decal as I could manage.

This decal sheet is highly recommended for a number of reasons. The Information sheet is thorough in its coverage of the aircraft which “wore” the markings on the sheet. The illustrations are clear and will be of great assistance when getting the placement of the decals correct. The price is reasonable. The decals are strong enough with withstand some significant “handling” but thin enough to allow molded detail to be seen. Thanks to Advanced Decals for making this decal sheet available to IPMS for review.

Information Sheet B
Previous Next