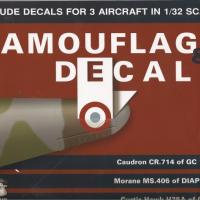 This is a British product, the first of a series, providing a very nice set of 1/32 scale decals and an accompanying booklet, featuring three aircraft flown by Polish pilots flying with the French Armee de l’Aire during the Battle of France in 1940. Two versions of this issue exist, one in 1/32 scale and one in 1/48. The decal sheet and booklet are provided in one unit, and cannot be purchased separately.

The booklet, a rather large publication of 16 pages plus cover, measures 13 by 9 ¼ inches, and consists of detailed information on the colors and markings of each aircraft. A short history of the pilot and his operational career is included, and these make interesting reading. The booklet is filled with excellently reproduced photos, mostly from German sources, as many of the photos show Luftwaffe personnel examining the abandoned French aircraft.

The decals are by Techmod, and are in register with good color matches. They did especially well with the French Blue, which usually appears too dark in most decal issues. The lettering styles are also right on the money, and even the smaller stenciling is readable. These are very high quality decals, and they are packed in a plastic bag, so they shouldn’t dry out, even if stored for many years.

There are numerous kits listed in my Burns’ Kit Collector’s Guide for these aircraft in all of the major scales, although some of them appear to be rather expensive. These aftermarket decals would be very useful in building models of the described aircraft using the drawings and photos of the aircraft for reference.

This product is highly recommended and the website for MMP is,

Thanks to MMP Books for the review samples.