STUG III Brigade 191, The Buffalo Brigade in Action in the Balkans, Greece and from Moscow to Kursk and Sevastopol 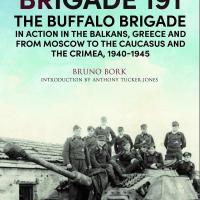 The book was originally printed in German and published by Vaerlagshaus Wurzburg GmbH & Co. in 1977. There was a revised edition in 2009 and this new edition published, and I suspect translated by Greenhill Books. The book is divided into 10 chapters and starting with the formation of the unit in 1940 and it ends with their last battle in South-Eastern Front in 1944-45.

I was impressed by the numerous photos in the book. You will find candid shots, action shots as well as the different equipment used by the unit. The book is basically a unit story and takes you through the many battles in which the unit was involved from its formation to its end. It will, also introduce you to some of their personnel and awards.

The book reads like a “unit story” and that is what its basically is; throughout the book you are introduced to the unit challenges during the battle and the outcome of those battles and many of the members of the unit.

The unit started their history in the Ukraine in 1940, and saw action in Greece. You read about their advance towards Moscow, as well as in the Caucasus, Kuban, Crimea and their evacuation to Romania. Finally they end the war in Austria.

The reader is taken through the evolution of the Stug III, as well as is variants. One thing I found interesting is that the idea of a mobile/tracked support gun started during WWI. The development of said weapon was not supported by General Guderian as he was afraid it would interfere with the production of the tank. The first experimental “heavy weapon” was formed in 1937 and the results of this experiment were satisfactory. Later on and after the Polish campaign it was proved that the need of a STUG III type weapon was necesary to protect the infantry and this led to the birth of Brigade 191.

Although many of the pictures pertain to members of the unit there are many of them showing the STUG III. Some of these pictures would be good starting points for a diorama. The only disappointment I had, was that there were no pictures in color but they are period pictures and color was rare. These pictures would have been great to describe the unit in one of the many models available of the STUG III. Considering the amount of information about the unit, this book is an excellent book for historians.

I would like to thank Greenhill Books and Casemate Publishing for the opportunity to review the book.