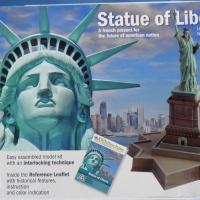 On October 28th, 1886 a gift from France was dedicated in New York Harbor, the Statue of Liberty. I am sure most of you are familiar with it and those who want to read it’s fascinating history can find much more online than I can give you here. However, I can relate my personal experiences with the Lady of Liberty.

In June of 2001, my family flew into JFK airport to start a 3 week trip that would cover 13 states and the District of Columbia including many famous battlefields, buildings, and some really fun amusement parks. We landed around midnight and finally got to our hotel in lower Manhattan around 1:30am. A coworker of mine had a sister who was a Park Ranger for Ellis and Liberty Islands and had made arrangements for us to see the Statue before the general public showed up. We had to meet the Staff Boat at the US Coast Guard dock at 6:30 in the morning. Our names were on the list and we took and early morning cruise first to Ellis and then to Liberty Island. Our guide met us at the dock, took us up the elevator in the base of the statue and showed us the stairs to the head. She advised us the Staff Boat would leave at 7:30 and we were welcome to return on it or we could wait for one of the ferries. She then left us alone to tour as we pleased. So, I have the great fortune to have been inside the Statue of Liberty with just the other 6 members of my family and no one else. To be able to climb to the head and peer out at NYC from the crown is a feeling I know some of you may have experienced but that day it was special. And just a few short months later, the world changed and NYC was on the news for an entirely different reason.

I was lucky enough to revisit the Lady in October of 2012 with a colleague from work. While this time I didn’t get a special boat trip or access to myself, I still enjoyed seeing her standing tall.

My modeling covers all kinds of genres and I do like building kits of places I have been and vehicles I have been in, so when I saw this new kit from Italeri show up on the list for reviews, I had to give it a go.

The kit comes with 10 parts molded in tan plastic, and the two pieces of the statue itself molded in a light greenish color. The kit itself can really be snapped together and, since molded in color, would make a great school project. While I did snap the bits together to see how well it would hold up, I did glue the pieces for a more permanent display. No scale is listed but the finished kit stands 17 cm and the Statue is 93 meters tall so some simple math comes out to 1/547th scale.

The molding is very nice with good details on the statue and nice brickwork on the base. The parts were flash free, but the statue had a crack in the lower front and a couple of injection marks on the rear of the base. The statue also had some strong mold lines that needed removing, and I did reshape one side of the robe to flow more with the rest of it. A little putty took care of the flaws and it was on to building.

As I said, the base parts really do snap together, but I used some liquid glue to get a tight fit, and did have to use a little putty where the four walls of the pedestal meet. One curiosity is that the kit includes an American flag to put on the base with the option to paint the flag colors, or to replace it with a printed copy in the instructions. The printed copy is a bit larger than the molded flag, so I looked at pictures to see what size it should be. Oddly enough, there is no flag on the base at all. Another oddity I noticed is that the kit lacks the stairs at the front and rear of the upper base. These stairs are clearly seen in the picture I took in 2012, and in the satellite image from Google Maps I looked at. I am not sure if these were added after the restoration the Statue went through, or if they were just missed by Italeri.

The instructions indicate to paint the base a Flat Light Flesh color with different browns and blacks used to pick out the details. I thought the base was more a greyish colored stone based on pictures, but in the end I used Tamiya TS-46 Light Sand from a rattle can and did some brown and black washes and some light dry brushing to try and bring out the details.

The color of the Statue itself had me trying to figure out how to get the color of oxidized copper. I eventually decided on Krylon Jade Satin spray paint and with a light wash of black to try and get some of the greyish looking color on her. I think it looks ok. The flame of the torch was done with Tamiya X-12 Gold Leaf.

So now I have a replica of a place that holds memories for me and I can say I built it myself.

Thanks to Hobbico and IPMS/USA for the review kit.

Seam between two halves of model

The actual Status of Liberty
Previous Next