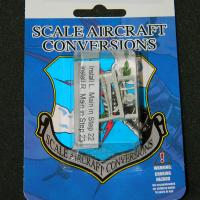 Thanks again to our prolific IPMS supporter, Ross at SAC, and to IPMS leadership for providing this set for review.

This set simply replaces the main and tail gear on the Airfix 1/48 new release (2014) Spitfire Mk I and Mk V.

BUT wait, there’s more! Included in this set are two different versions of the spine-mounted Radio aerial post, and the underwing Pitot tube. Very nice, and good use of a small set’s versatility, particularly since there is not much to this set as far as metal volume. Might as well amortize costs, and this does it.

Notice on the stock kit that the main gear is in two parts; the upper strut and pivot assembly, along with the uplock arm, which attaches to the trunnion pivot points, and then later in the build, the lower shock strut. Why was this done? So you could install the fragile gear later, while working on the rest of the model, without cleaning off the gear with gorilla hands. Smart engineering.

SAC’s take on this (and I agree) is to use one-part struts of metal, which then have durability to take punishment during construction. There is a note which MUST be followed in the packaging of this set: The slip of paper is an admonition to install the gear in step 22 and 23. FOLLOW THIS or pay the price!

The way the spitfire gear is installed, it is almost impossible to install the gear after the wing is assembled. With the SAC gear, you can install it and have not only strength for the build, but also rest assured the model will not “SAG’ on its’ gear if you are fortunate enough to retain models without collateral damage.

The tail gear strut and tire are almost total duplicates of the kit gear, with a bit smaller tire. This can still be an “end of build” installation, along with the two aerial masts and the pitot tube.

A note on the “Why” for a pitot tube: the kit flow gate is in the center side of the pitot tube itself; on the SAC flow gate, the metal enters the front of the tube. I definitely prefer the SAC method, as it does not require delicate, overly sensitive clean-up on the side of the tube. Clip and install!

Can’t say enough of SAC products; they are professional grade for our use. Another “Score” for SAC gear; durable enough to take knocks, and simpler to install. Thanks again to IPMS leadership for the opportunity to review this great metal gear!