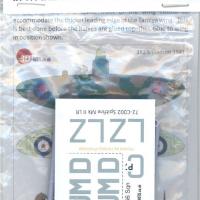 In 1941, Britain had an idea on how to extend the range of the Spitfire MK II so that it would be able to escort and protect their bombers from the Luftwaffe further into Europe. This idea incorporated a 40 gallon fixed fuel tank under the port wing. The only problem was that speed and maneuverability suffered. The tanks were used by the RAF’s 66, 188, and 152 Squadrons.

This set is made by a company named 3D-kits in the UK. I went to their web site and was impressed with what I saw. They have one area where you can download a Spitfire control panel that you can make into a decal and there is information that will answer most questions you might have about the Spitfire conversions they make.

The parts come in a small ziplock-type bag with a small cardboard backing that has the instructions and some history and decal information. These instructions are pretty small but, if you go to their website, you are able to print off the instructions a lot larger, which made the decaling process a lot easier. The tank comes in two halves that are molded in flash-free gray plastic. Recommended kits are the Airfix MKI/II or the Tamiya kit. You can also use any other kit you want; all you’ll need to do is use a little filler to make a smooth seam between the tank and wing. Another plus is that the sprue is only connected on the side that is against the wing. I chose to use the Airfix new tooling Spitfire MKI/II to check the fit, and just like they claim, it fits perfectly.

Also included is a small decal sheet for two aircraft, one from 66 Squadron and the other from 152 Squadron. The only thing to remember is that you’ll need all of the common markings that come in the Airfix kit. The decals were in register, only needing about six seconds in water to release from the backing sheet. I used Micro Sol and Micro Set liquids and they went down very well with no silvering. These are really great decals.

I highly recommend this product if you want to build a Spitfire out of the ordinary. I liked this product so much I went and ordered the Hurricane conversion to change it from a MK IIC to a MK IID tank buster (2 underwing Vickers 40mm S guns). Squadron sells 3D-Kits products here in the U.S. and from what I see in their catalog they have the whole line. Thanks to 3D-Kits and IPMS USA for the chance to do this review.