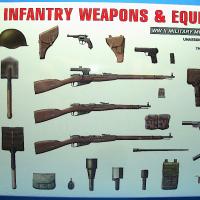 MiniArt is a Ukraine company that was established in 2001 and released their first kit in 2003. They are well known for their Diorama series, but the have released many armored vehicles, figure sets and accessory sets over the past several years.

This set comes in an end-opening cardboard box and it contains four sprues of parts molded in a light gray plastic. The molding is clean with no flash, but there are a few minor mold lines that will need to be removed on some of the parts. The attachment points on the parts to the sprue have been well thought out even though some are on the large side. This should make clean up easy. These pieces have a high degree of detail even though some are relatively small.

What comes in the kit is as follows:

As you can see, this set includes many pieces that would compliment any Eastern front diorama. I would recommend this set to anyone that builds WWII Russian subjects, but could even go as far to include Korean era and Viet Nam with this set.