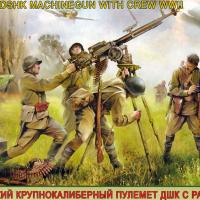 The DShK 1938 (Degtyaryova-Shpagina Krupnokaliberny, “Degtyaryov-Shpagin Large-Calibre”) became the standard Soviet heavy machine gun of WWII. It fired 12.7x108mm cartridges (the West’s M2 .50 cal fired 12.7x107mm) fed by belt or box magazine. It was frequently deployed with a two-wheeled cart and a single armor shield (similar to that used by the Maxim) as well as on a tripod for anti-aircraft. It was mounted on GAZ trucks, on late war tank cupolas (IS-2, ISU-152) in tank turrets (i.e. T-40), and other vehicles and ships.

A modernized DShK 1938/46or DShKM version appeared post war, which looked much the same. The Soviet Union , Russia, People's Republic of China, Pakistan and Romania have manufactured the DShK which has appeared throughout the world. I recall in Vietnam it was called a “.51 cal.” as it fired a slightly larger round than our M2 (the rounds were not interchangeable), and was one of the weapons our vulnerable helicopters learned to respect.

This set has one tree of medium gray injection molded parts for four crewmen, a second tree with 23 parts for the DShK and a clear disk to affix the ring sight decals to (I’m going to add a more effective photo etched sight). The crew can be depicted loading, firing and setting up the DShK as depicted on the action packed box top color painting, which also serves as a guide for painting the figures. Each figure consists of the head, torso, separate hands, arms and legs and separate helmets and gear. They are nicely sculpted with individual faces (their leader is open mouthed, shouting a command) and paper thin 1940 pattern helmets that have liners molded inside. The leader has a map case and binocular case in addition to the complete set of gear for each man. Make sure you give the correct ammo pouches to each man, according to the weapon he’s holding. Separate bolts are provided for the two Moisin-Nagant carbines (they usually wouldn’t be ‘open’ unless it was being loaded or cleaned) and one of the two PPSh submachine guns has a curved magazine while the other has a round drum magazine. Two men wear boots and the other two wear puttees and ankle boots.

A nice touch by Zvezda is having hands molded right onto parts they’re supposed to be holding. If you want to show the crew setting up the tripod, tripod legs are provided with hands molded on! I’m going to drape a photo etched ammo belt onto the standing crewman with puttees. I may have the bent over trooper picking up an ammo can when I complete them on a scenic base. Model Master paints are called out by their numbers, not names. I used Model Master Enamel Middlestone for the uniforms, then covered everyone with Future, then wiped on and off burnt sienna oil. If you want to be able to elevate the DShK on its tripod, cement parts B5 and 6 to B23, then pop in the DShK part B21. A second, incomplete DShK is provided, and the two-wheeled mounting is provided for display, not assembly of a second unit. One ammo can and a length of ammo belt are provided.

The parts are crisply molded with minimal seams, and no sink marks or ejector pin marks to clean up. You do have to drill out the end of the DShK barrel – be careful to center it. The molding is state of the art – the multiple ridges on the barrel are amazing! The sculptor has done an exceptional job with the DShK and figures. Zvezda adds this excellently rendered DShKto their growing line of figure sets. I can heartily recommend this set to any modeler with some experience. My thanks to distributor DML Dragon and for the review sample – and my apologies to them for the delay in building and reviewing the kit. Hand tremors and chronic pain have made modeling a greater challenge for me, and Zvezda deserves kudos for engineering this kit so that even I could overcome my problems and successfully complete it. It is available in all better hobby shops or contact Dragon at http://www.dragonmodelsusa.com or call: (626) 968-0322.

Thank you to Zvezda, Dragon Models USA, Inc. and IPMS/USA for this review sample.

Left side of ammunition bearer

Right side of ammunition bearer

Left side view of gunner