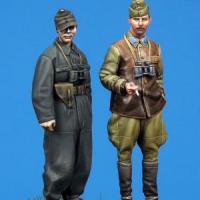 Krisztine Bodi is a European figure sculptor of some renown who started his professional career producing masters for the likes of Alpine, Young Miniatures and Mantis. As so often happens, Mr. Bodi eventually decided that working for himself might be the smart thing to do, so he set up his own line of figures under the brand name “the bodi”. The range now numbers nearly 100 figures in various scales, most covering the period of the Second World War.

My approach to reviewing these two figures sets (3 figures total) this time around is to provide you with photos taken by myself of the unpainted resin pieces, together with photos borrowed from the producer’s web site. This is because these beautiful sculptures deserve better than my almost non-existent figure painting skills have to offer. I want folks to see the quality of the resin parts, but also see what a good figure painter can then do with them.

From my photos, you will (hopefully!) see that the sculptures themselves are first rate, with lovely folds in the material of the uniforms, and excellent facial features on the heads. Each figure consists of a main torso and legs, with separate head and arm(s). Though each of the three figures represents a Hungarian military officer, each has a completely different uniform, which makes for great variety for the modeler. The resin is bubble free, with only a small amount of “flash” to be removed in a couple of places, most notably between the legs of one of the figures. The facial features of each figure are completely different, which is great, since I have noticed that some of the lesser figure sculptors tend to have a distinct similarity to the facial features, as if all the figures in their range were brothers by birth!

I can recommend these figures without hesitation, and hopefully by examining the photos provided in this review, you too will see how very nicely Mr Bodi has rendered these Hungarian officers in miniature. My sincere thanks to The Bodi for providing IPMS USA with these review samples.

The Bodi up close facial features

The Bodi 35050 Painted Figure
Previous Next