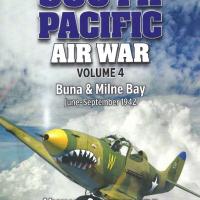 Avonmore Books is an Australian publisher specializing in military and aviation history, with a particular interest on the early period of the Pacific War. Avonmore prides itself in being the only mainstream Australian military history publisher producing full colour, illustrated books. While expensive to produce, we strive to produce titles that are a pleasure to own and read, and which incorporate first-class profiles, illustrations, and maps. To date, Avonmore Books has published 25 aviation books.

Raised in Port Moresby, pilot Michael Claringbould is a globally recognized expert on the New Guinea air war and Japanese aviation in particular. In 1976 he conducted numerous surveys of crash sites in Papua New Guinea while based at Lae. The following year he continued his survey of crash sites in the Solomon Islands. In 1984 he was a key member of a RAAF salvage team, which recovered an intact Douglas A-20G "Hell'N Pelican II". From 1995 to 2001 he conducted fourteen surveys of crash sites in the Vanuatu and the Solomon Islands. Michael is an established author in this field as well. His books include Helluva Pelican, The Forgotten Fifth, Forty of the Fifth, and Black Sunday.

Peter Ingman is an author specializing in aviation and WWII Pacific War history. Peter has co-authored five widely acclaimed Australian WWII history books: Zero Hour in Broome, Carrier Attack Darwin 1942 and four volumes of the South Pacific Air War series. Through his publishing business Avonmore Books, Peter has also had extensive input into further military history books by a variety of authors. An award-winning essayist, Peter is the Chairman of the History Group at the South Australian Aviation Museum. He lives in Adelaide with his two young children.

The front cover features a color illustration of an ex-RAF P-400, still in its RAF camouflage scheme. This 80th FS Airacobra struggles to gain altitude over Port Moresby in July 1942. The rear cover depicts a color illustration of Buntaciho Lieutenant Sasai Junichi lining up a 3rd Bomb Group B-25C Mitchell over the Huon Gulf in June 1942. I counted 17 color side profiles, 15 color illustrations, and three color maps by Michael Claringbould. There are also 56 period black and white period photographs, three modern color photographs, along with ten tables.

Michael Claringbould and Peter Ingman describe the battles between June and September 1942 over Buna and Milne Bay from both sides. The previous three volumes cover the first six months of the Pacific Sea, leading into the Battle of the Coral Sea. Volume four starts off with an overview of both the Allied and Japanese sides to get the reader orientated. The rest of the book provides detailed operational accounts of the air reconnaissance, air strikes, and air battles; both in overview along with detailed first person accounts. The authors provide details of both sides claims aligned against actual battle damage that clearly displays the fog of battle. The period of June through September 1942 saw no major sea battles as carriers from both sides were otherwise occupied, so most of the action was from land based aircraft.

There are a plethora of tidbits and first person accounts that make this book an easy read. One of the more memorable operations for me addressed two Consolidated Catalina nuisance raids on 27-June-1942 over Lae and Salamaua. Circling for over four hours, they both randomly unloaded eight 500-lb bombs while the crew dropped 20-lb fragmentation bombs by hand. To spice things up, they also dropped empty beer bottles which made a whistling sound as they descended.

Michael Claringbould’s color side profiles and color illustrations add a lot to the period black and white photographs to this tale. This was an easy read over four nights that was hard to put down. Now I just need to go back and grab the first three volumes!

My thanks to Casemate, Avonmore Books, and IPMS/USA for the chance to review this great book.