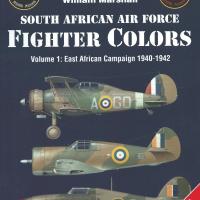 This is volume one in a three volume set to cover the SAAF in WWII. This volume covers the East African Campaign with the following two volumes to cover North Africa and Malta as well as Sicily, Italy and the Balkans! The SAAF was sent to protect the Sudan and Kenya early on in the war from the Italians and their 200,000 troops and some 400 aircraft. The SAAF 1, 2 and 3 squadrons were equipped with mostly obsolete bi-plane aircraft such as the Gauntlet, Gladiator and Fury with which to counter any Italian attack. These were augmented by a few fabric winged and wooden propeller equipped Hurricane Mk Is. Later on these units joined by 4 Squadron that brought its Curtiss Mohawk fighters and Gladiators.

The book is broken down into 10 sections. First is a brief introduction then each of the four main squadrons given its own chapter and 41 squadron which was formed from an Army Cooperation Squadron after the campaign and the 41 Fighter flights which was formed to seal the boarder with French Somalia. The final main written chapter is on aircraft finishes covering colors and markings of the various aircraft during the time covered. Next come 23 gorgeous color plates of the various aircraft used. Lastly, the appendices with some additional information and smaller color plates on the Gladiators and Hurricanes.

The book is well researched and the authors draw heavily upon Squadron war diaries and pilot logbooks for details. Good coverage of the different squadron’s combat histories and colors and markings make this book both enjoyable to read and a great reference guide for those wishing to model the aircrafts of the SAAF during the East Africa Campaign. This along with all the color profiles will please the modeler and historian alike> I can recommend this book to WWII modelers, historians, air combat enthusiasts and anyone who would like to model or learn about a much lesser known and discussed theatre of WWII. You will not be disappointed and I look forward to the next two volumes!