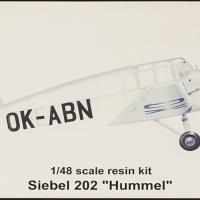 I was not familiar with the Siebel 202 “Hummel” (Bumble-bee) prior to this review, and the internet is not overflowing with information about this little gem. This build crosses a couple of firsts off my list: 1) a full resin kit, and 2) a kit from the Czech company Master-X. Up front, I will say that if given another opportunity to build one of their kits, I will do so again.

What you receive in the sturdy little box is a very nice set of clean, detailed resin pieces molded in a couple shades of beige, as well as two black pour stubs with the small resin pieces, including landing gear parts, the control stick and a few as yet to be identified pieces. They also include a basic assembly guide, with color guide on the back side of the sheet, as well as a small photo etched fret, one canopy, and a nicely made decal sheet printed by Aviprint (more on this later).

The kit will build one of three Siebel 202 models, and the nice thing is that Master-X has included the proper nose piece for each of the three planes, as well as one of two stabilizers necessary for a correct build. The quality of the resin parts is fantastic. Other than a few pin holes on the fuselage, leading edge of the wings and stabilizers, I have no complaints about the casting. I should mention a few small issues with the resin. The wing is molded in one piece, and there was a small downward bow in the right wing with my example. A few minutes work with boiling water took care of that little issue. The other small issues occurred when removing the vertical landing gear pieces from the pour stub. Please use caution as I broke my first one, and a small fix was necessary to complete the part. The last issue was with the propeller. The center of mine was hollow, and it too broke during construction. I repaired the break with c/a glue, and filled the hollow center void with some epoxy putty. It was good as new after the repair.

The fit of this kit is very good, and it is how I would expect a decent resin kit to behave. I had to do a little work with the saddle for both the stabilizer and wing to get them to fit properly. I don’t recall any “gotchas” with assembly of the resin parts. This is not to say it was a perfect build. The instructions are well… vague. I wasn’t sure where exactly in the cockpit to put either the seat assembly or the instrument panel. I did find some photos of the real Siebel after a Google search, and based on where the pilots head was visible in the photo, I guessed at the seat and instrument panel locations. A little sanding was necessary to get them to fit in properly. I also have to mention there are a few resin bits and photo etched pieces that are not identified in the instructions, so I wasn’t sure where to put them, nor was I sure of what they were.

With the basic build complete, I applied a coat of primer, and my custom Tamiya paint RLM-02 mix was airbrushed on the airframe. A gloss coat was applied as well, prior to applying the decals. You by now have noticed that several decals are missing from my build. I normally use a spring loaded tweezers to grasp the decals when I immerse them in warm water. I normally submerge them for ~10 seconds, and after a quick shake I let the decal rest a few moments until it will slide off the backing paper easily. In the case of these decals, don’t leave them in water 10 seconds. Not even 5 seconds. A quick dunk and out again will suffice. On my first decal, when I gave it my standard little shake the decal literally flew off of the backing paper and into a heap on my work bench. I was not able to recue it. After a few more seconds the decal just broke apart while attempting a repair. Of the decals that found their way onto the model, they were very thin and settled down great without the need for decal solvent. I would again recommend a quick bath, and then get the decals into place right away with as minimal fuss as possible. I should also mention that I work my decals down with a damp cotton swab, and you don’t want to do anything other than gently roll the cotton bud over the decal. Ye have been warned! Be careful!

I did send a note to Master-X asking about purchasing a new set of decals so I can truly finish this kit. I really think it will do well on the judging table, but not without all her markings. They replied to my email right away, and a new set is in route to me. ;-)

I want to pass along a sincere thank you to Master-X for providing this fine resin kit of a unique little observation aircraft, and to the IPMS/USA, a big thank you for allowing me to review this kit.