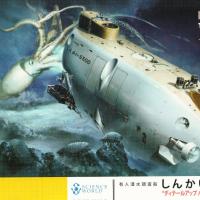 First launched in 1991, the SHINKAI 6500 is a manned submersible that can dive to depths of 6,500 meters (20,000 feet). Operated by the Japan Agency for Marine-Earth Science and Technology (JAMSTEC), Shinkai has completed over 1300 deep dives in the Pacific, Indian and Atlantic oceans, as well as the Sea of Japan.

In 2012, the vessel underwent a major upgrade, including conversion from a single aft prop to two thrusters and the addition of one more horizontal thruster for maneuverability. Hasegawa offers the kit with two build options to reflect the original and upgraded version of the submersible. To clarify the build process and the differences, the instruction sheet includes complete build sequences for each version. It's worth taking the time to go through the instructions – particularly since other sub-options are offered within each build – to end up with the configuration you've chosen.

All parts are crisp, and a minimum of flash removal is required. Interestingly, many of the parts go together in “snap-tite” fashion – I had to trim down some of the pins in order to fully seat the parts together. I only ran into gap issues when joining the upper and lower hull halves, and this was remedied with a few sanding stick swipes and a small amount of Mr. Surfacer 500 filler.

Hasegawa gives you a fret of P/E parts to replace the two sample baskets mounted under the observation windows, and these were much more scale-like in appearance so I elected to use them. There's some origami-like folding involved, and the instructions take some time to decipher. Some surgery to the mounting arms is necessary, and the left and right assemblies are subtly different, so go slowly here. I wicked thin CA adhesive into the folded joints but fought with a couple of reluctant corners. Still, I think the finished baskets turned out well.

I primed all the parts with flat white enamel and applied a coat of Pledge Multi Purpose Floor Finish (the successor to Future) in preparation for panel line detailing with acrylic tube watercolors and decal application. Lesson learned here – I left the acrylic wash for a couple of days before wiping, and it leached into the MPF coat – resulting in a repaint when I couldn't get it off. Won't do that again!

The fin and conning “tower” are molded in orange, but I chose to paint them to reduce the shiny bare plastic appearance. Most of the exterior parts can be press-fitted into place, so final assembly took literally minutes. The circular logos for JAMSTEC on the fin are misoriented on my build – I put them on the fin when it was still unattached, and aligned them incorrectly. All the others went on well with Solvaset, including the three large brown decals that make up the top deck of the sub. Hasegawa includes a large card of detail color shots of the prototype vehicle (as well as of the completed model) that come in handy during painting and decaling. There are a number of additional components and cable bundles shown in the photos that are not included in the kit but if someone were interested in superdetailing Shinkai, these images would come in handy.

The completed model, while diminutive, makes for a colorful and unusual addition to my display case. My thanks to IPMS/USA and to Hasegawa and their US distributor, Great Planes Hobbies, for allowing me to build this one of a kind submersible.