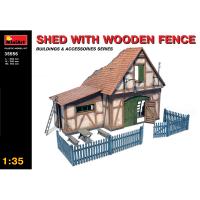 This is the second review I’ve done of a MiniArt Building, and let’s just say they aren’t getting easier. That’s not to say they’re not great kits, but they are perhaps they lend themselves to the more experienced modeler. If you haven’t built or seen one of these, the kits consist of both Vacuform and injection molded parts. The major building pieces are vacuformed with the interior and exterior walls and roof sections molded as separate parts. No base is included/provided as in other MiniArt building/ruin kits. The detail on the kit is quite good, and this kit in particular comes with extra parts that don’t necessarily go on the shed, gutters, downspouts, louvered shutters for example. These can go right into the spares box for another time.

The wall sections come molded into large sheets of grey styrene. Each section of the wall and roof must be cut off the carrier sheet with an x-acto knife. This process takes a while and a few blades. The instructions are a bit vague in spots as to where and how much to remove from corner sections. In most cases it was clear but in others I ended up with large gaps that had to be filled with styrene and putty. Once you have all the wall and roof sections cut off the carrier sheets, the real fun begins… sanding the rough edges and getting mating surfaces evened up. The ideally method would be to use large sheets of sandpaper (8x11) to sand each wall section. I didn’t have large sheets like that so I did the best I could. The process took a little longer but produced some spots where the joints didn’t marry up flush, but no biggie, that’s what putty is for right? The instructions would have you simply glue one side of a wall to the other, but the fact of the matter is there’s not enough surface to hold a good glue joint. To get around this I glued strips of Evergreen styrene strips (.015x.250) around the interior of one side of each wall section. This provided a good mating surface and allowed for a stronger joint. Once all the major wall sections were done, I moved on to the roof sections. Here no additional styrene was required but I found good old-school clothes pins worked well to help hold parts together while the glued. Once all walls and roof sections were built it was time to put everything together and clean up any ragged edges with Tamiya grey putty. Dick Montgomery gave me a tip he’d used to glue the major components together…Hot Glue. Having a hot glue gun at home, I gave it a try and found it worked well and produced very strong joints albeit a little stringy. As you can see from a few of the pictures, I used a fair bit of putty. Two major sub-assemblies were built: the building and roof sections. I found all the walls came together “square” save one, the front left corner (see picture). This corner was slightly out of square. This could have been my error when removing the corner sections (step 24 of the instructions) or a flaw in the kit, I can’t say for sure, but the instructions in this area were a little vague.

I began painting, starting with a primer coat of flat black. Once that was dry, I began priming the wooden beams with Vallejo Iraqi sand using my airbrush. Next I began building up the wood grain look by brushing on successive very thin coats of Vallejo “Smoke” until I got the look I wanted. Next I sprayed the stucco panels inside and out using Tamiya Deck Tan using a cloud pattern so that some of the black would show through to create shadow and depth.

The exposed brick and roof tiles are another matter, for these I chose to paint each individually using a variety of Vallejo and Tamiya acrylics. This takes time to be sure, but the effects are worth it as they give you nice contrasts between each brick or tile.

AK weathering products were used to develop a nice dirty patina and tone everything down. AK Slimy Green Streaking Grime was especially nice for creating the work green paint seen on the shed door and hay loft door.

All in all this was a fun but at time tedious project. A good bit of filler and sanding will be required, but if you have a good amount of time you can really make this into an impressive diorama piece. To be sure the details of the kit are there. When compared to resin or plaster buildings/ruins these are a good alterative, are competitively priced but may require some more sweat equity from the modeler to finish. I would highly recommend the MiniArt line to anyone wanting to try a vacuform building. For this particular kit, I’d recommend it for more experienced modelers. Many thanks to MRC and MiniArt for providing IPMS with the review sample.