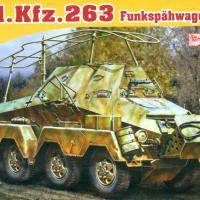 The Sd.Kfz. 263 Funkspahwagen (8-rad) is part of Dragon’s 1/72 “Armor Pro” series. You get 91 medium gray hard plastic parts on five sprue trees with minimal flash. The instructions are very well illustrated with six sequences of assembly and painting guides for 5 marking options. The detail is exceptional and is consistent with other armor kits in this range. The decals are in perfect register and allow you to customize the license plates numbers.

I started by assembling the lower hull to the upper hull. This was followed by attaching the front and back upper hull plates. Mr. Surfacer was used to fill the slight gaps. I then attached all the smaller bits such as headlights, tools, roll bars, and license plate holders. Next, I assembled the fenders as per assembly step #3. I then returned to the main hull and installed the leaf springs as well as the linkages from step #1. I assembled the drive axles and drive shafts but did not attach the main wheels, as I would do these later during final assembly. The front crash guard was then assembled. The last thing I did was to attach the aerial mast supports to the main hull. So now I had the following sub-assemblies ready for painting: 1). the main hull, 2). the fenders, 3). the crash guard, 4) the drive assemblies.

I painted the sub-assemblies with a base of Tamiya German grey. I then applied a 50/50 mix of Tamiya Desert Yellow and Dark Yellow; the mixture was misted on lightly so some of the German grey would show in areas of shadow and wear. I applied MiG dark wash to help all the details pop; this was followed by some dry-brushing with Model Master Israeli sand. Next, I added scratches and chips with Floquil grimy black. The tools and other bits were then painted. My attention then turned to the running gear, including the wheels; these were painted German grey. The drive axle assembly and lower hull were lightly dry-brushed with a mix of Model Master Chrome silver and raw umber oil paint. The wheels were masked and the centers were painted the 50/50 mix of desert/dark yellows.

Since I had painted my 263 in a desert scheme, I just used the license plate decals only, as the marking options provided do not include a machine used in North Africa. Next, I lightly airbrushed everything with thinned Tamiya Buff to give a dusty look. It was now time to put all the sub-assemblies together, and I was not disappointed as the level of engineering in the kit allowed for a trouble-free experience. I also added a few homemade storage items, such as bedrolls and wooden boxes. A few more minor touch-ups and my 263 was now complete.

I primarily build 1/72 aircraft and don’t have a lot of experience with armor, but I really enjoyed this kit. I can enthusiastically recommend this kit to all 1/72 armor fans as well as newbies to small scale armor.

I would like to thank Dragon USA, and the IPMS/USA reviewers’ corps for the opportunity to review and build the Sd.Kfz.263 Funkspahwagen (8-rad) (“say that really quick ten times in a row”).