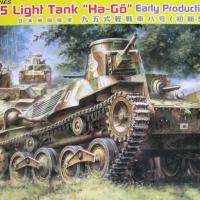 Production for the Type 95 began in 1936, and was first introduced in combat in 1937. The type 95 was a small, light tank weighing in at 7 tons and having a crew of 3. It was armed with a 37mm main gun augmented by 2 Type 97 light machine guns. The early version was powered by an 110hp Mitsubishi diesel engine for a top speed of 25mph (road) and was later replaced by a 120hp Mitsubishi NVD 6120 diesel that brought the speed up to 28mph. The Type 95 was obsolete by 1941 but soldiered on till the end of the war being used mainly in banzai charges or dug in as pill boxes. It was a good tank in the 30s but should have been replaced by 1941. There are at least 11 Type 95 survivors in the world today with 1 that is operational.

The construction is broken down into 15 steps. As far as assembly goes, the instructions are pretty clear, painting instructions are a different matter. Steps 1-4 deal with the lower hull, road wheels and MGs. Steps 5-8 deal with the upper hull and mating of the lower & upper halves. You have the option in a few places to use the photo etch parts and I used a couple but a few were for posing the hatches open. Since I built it buttoned up, I did not need these. Also, you are given P/E pistol ports and have to cut/sand the molded ones off. I chose to try one and leave the rest as the molded ones look fine to me. Steps 9-11 deal with the turret and turret interior. The gun breach detail is nice as are the MGs, but with no figure I decided to close it up. Steps 12-15 are for the final exterior pieces (tool box, rear fenders, exhaust, tools, tracks and placing the turret on). The instructions noted not to glue the turret but I did anyway as it fell off a couple times. The vinyl tracks are really nice but a length too long. A simple cut from each end and they were fine. (If you want them to sag you will not need to do this) I would like to say that construction was simple and straightforward, a pretty easy kit to build.

I used Tamiya acrylics for the camouflage scheme (XF 49 Khaki, XF 64 Red Brown and XF 70 Dark Green). Tamiya X-11(Chrome silver) was used on the tracks with a heavy wash of Testors Acrylic Burnt Umber. You get decals for 4 different vehicles and they decals went on smoothly and set nicely with a small bit of Solvaset. As mentioned before, the painting instructions are a bit hazy in some areas. You are given the option of posing the hatches open but no information as to what color to use on the interior. Also, there are no colors given for the main gun, MGs or tools. Actually the only colors given are for the camouflage pattern.

This was an easy kit to build. The fit was outstanding, instructions clear and unlike some of the other Dragon kits there are not many extra pieces. Dragon has a winner here and hopefully they will do more of the Japanese armor from WWII.

I would like to thank Dragon Models USA for supplying this kit and the review corps for letting me build it.