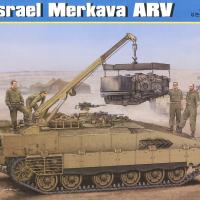 This was on the review list for some time before I volunteered for it. This vehicle comes with the anti-slip texture that is missing on so many newly released Merkava-based kits, and I could not understand why no one wanted to review it. Maybe it was because it is one of two prototypes currently being evaluated by the Israeli Defense Forces. This version is called the NAMER ACHZAKA and it’s bigger brother is called NAMERA. Imagine these vehicles similar to the M578 and M88. The big difference is that both IDF vehicles are based on the Merkava Mk. III chassis with many Mk. IV components. The NAMER ACHZAKA crane can lift the engine pack of the Merkava for quick and easy changes. Supposedly, these are based on modified Merkava III hulls. Well, one thing right away that stands out is the HUGE final drive housings. These are definitely late model Mk III versions or IVs because they are too huge to be the same as seen in the Latrun example.

Included inside the large super-sturdy box is some great stuff. All parts and sprues are contained in sealed bags, which is great for safety. The lower hull has no details whatsoever underneath – not that that is a bad thing, but for the rivet-counter types, you will be able to go hog wild here. There is also the beautiful-looking upper hull, 15 other sprues done in green styrene, two idlers (slide molded as a single item), one clear sprue, one PE fret, a piece of copper wire, a large bag of tracks, an assembly booklet, and a painting guide. No decals are included because it’s a prototype vehicle. There seemed to be a large number of pieces with excess flash and plastic blobs on the parts. I was sure this would be an easy fix. The track is also designed after the ModelKasten approach. This means that two pins hold two shoes. Track building would be a long, slow process.

One of the neat things about being retired military in Puyallup, Washington, is that I can take my Neon to Firestone and have them do a tune-up while I go over to the food court, pull up a table, and go to work on this kit. I started with the standard road wheel clean-up and noticed that there was a large mold release line around all the wheels. Odd for a newer release kit. The crane assembly was the same. The mold lines on some parts were almost an eighth-inch high. There was also an ejector pin mark on the crane mount, so this would have to wait until I could get back to the man cave to fix that.

As I despise photo etch, I made up my mind to knock some of it out right away. I do not like adding stuff to the upper and lower halves, then attaching the hulls together. My way makes overall handling more comfortable and sturdy. Of course, you need to look over the instructions carefully to insure nothing will come back and bite you later. The two hull halves have to be assembled and seven pieces of PE get sandwiched between them. These are the exhaust louvers on the right hull side. Hobby Boss PE for this kit is extremely thick and sturdy. The parts need to be bent to 65 degrees and an end cap added. I think these could have easily been done with styrene, but I am nothing more than a humble builder and not the designer. These went together semi-decently. I over-bent two of them. They want you to add a 90-degree bend that attaches into a slot in the lower hull. This made the louvers just not sit right. I ended up cutting the 90 degree bend part off and glued the louvers onto the groove. I think they turned out decently enough. Then, in step two, I got slammed into doing more photo etch. Now, I feel this is where PE is stupid and worthless. The Merkava IV, which I believe these are patterned after, has six drain/fill plugs in each final drive housing. These plugs are countersunk into the housing and use a ¾ inch square head adapter. Hobby Boss gives you 12 round disks with round center holes. So, instead of having an accurate representation of the filler plugs, you now have raised disks with round center holes. These definitely should have been molded into the housings. Big thanks to Matthew Pritchett for providing a really close-up shot of the housing that showed the drain/fill plugs. Then we move onto step three and Hobby Boss has given you two already molded-together idlers. I thought this was a neat idea until I looked them over. There was a lot of required clean-up from over-pressed or slid plastic. Then the major 1st FAIL (yes, there will be more) – the track! I said in the initial look-over that these looked like a ModelKasten design. Well, looks are about it. The parts come molded with two shoes and 4 pins per sprue. Each shoe has 4 sprue lugs to remove and then clean up. This (again, my opinion) is a waste of time. The connection points for the sprue lugs and track shoes are not well defined and leave the builder with a lot of cleaning. Plus, they have you attach these four pins and they serve no purpose. The pins do not hold the shoes together (as they do in ModelKasten and Fruil track). The Merkava III track has recessed pins on both sides of the shoes. If this were not a review kit, I would have used a set of Fruil track. However, even this investment would not be worth it, as there is no real need for articulated track since over half of it is hidden by the side skirts. Also, it would be a waste of the Fruil track unless you are going to invest the time and research to fix the crane….more on that when we get there.

In step seven, I feel there’s another useless application of PE. Parts PE11 are fuel tank access plates that you have to apply, and then immediately cover them up (so they are not seen) by parts C14 (armored covers). People wonder why I don’t like PE. Step eight is another step where PE fails. Both personnel hatches have two round PE end caps that get added to the spring tubes. The problem is that the tubes are not perfectly round but more oblong, while the PE is perfectly round. However, the places where PE works, it works well. There are four PE grille intakes and two PE headlight covers. Here is where its application shines. The fit is a little loose but completely gorgeous.

There are a total of 15 periscopes involved in this build. Hobby Boss designed 13 of them so that the covers are hollow and you apply 13 flat pieces of clear styrene for lenses. However, they included two that are on the driver’s hatch that are clear styrene (cover and lenses). Now, no matter how you do it, you will not get them all to end up looking the same.

The crane was assembled, and they have you use a piece of brass wire to attach the hook to the crane. Somehow, I think this should be a cable, but I might be wrong. The finished effect does not quite look right. The crane is moveable in almost every direction, but there are no included hose lines or cabling. This may be how a newer crane operates but I think hoses need to be visible somewhere.

All the parts were painted Model Master Israeli Armor Sand Gray. A gloss coat was added, and then the lower assembly was washed and flat-coated. All the suspension components were attached, and I began the fun part of feeding 100 links through the idler and sprocket to finish the track run. The instructions have you use 100 links. This was one link too many on mine, and after removing them and spending about 30 minutes per side, I still could not get the runs to attach to each other. I used epoxy glue to attach them to a middle double-wheels idler wheel. After the tracks were given a brushing of liquid cement and allowed to dry, I dry-brushed the outer tracks and used Chrome Silver to highlight the upper shoe points.

I added a styrene rod antenna and attached the tow cable on the side of the left hull. This item really needs to be replaced with nylon thread or wire, as the detail is very weak. The periscopes and headlights were touched up and the lenses added. I applied Verathane to the items that needed a high-gloss look. The crane was added and I probably messed up on the length. The instructions show the crane lowered and the pulley sitting on the hull. My cable is too long and sits on the rear bar armor.

The two weapons stations were added and it was finished. There are no markings. This may be legit, as the vehicle is still undergoing trials and therefore may not be in actual IDF inventory and requires no identification plate.

When I volunteered to review this kit, I knew there was going to be an issue with the crane. While I do not have lots of good up-close pictures of this particular machine, I know there are numerous external hoses around this device. I was willing to accept that because I love the IDF and no one had jumped on it. I was not expecting all these other errors that were encountered. Some can be overcome with aftermarket items and better research or photographs. Some, however, just makes you scratch your head and wonder. This is a really nice kit of a one-off (for now), and with some time spent can be turned into a really nice kit. If the IDF accepts these, Hobby Boss might release a later version and make some changes.

I would like to thank Hobby Boss for adding this to the IDF modeling lineup. Bigger thanks go to MMD-Squadron for providing the review sample, and finally to IPMS/USA for allowing me to review it. This kit allows for several diorama possibilities or works well as a stand-alone kit. Have fun and build this Merkava variant for your inventory.