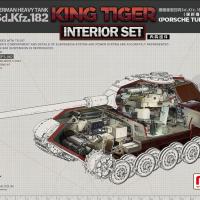 My, but when it rains it really pours, doesn’t it? After years of comparatively limited (and sometimes pretty iffy) kits of the impressive King Tiger, we now have numerous companies falling all over themselves to provide THE definitive version of this classic monster. Meng, a relative newcomer to the modeling community, has chimed in with their own contribution – one which offers a lovely Porche-turreted vehicle in classic 1/35th scale, but also a separate kit of the full interior as well as a decal set for the zimmerit.

Because of the nature of the build, the interior kit and the basic kit are unavoidably interlinked, as you will have to bounce back and forth between the two a fair bit during construction. As I intend to write separate reviews for these two items, I will do my best to refer to the companion kit (in either case) only in its relation to the other kit’s construction. Bear with me on this – I found myself going through the directions and crossing out portions of both sheets so I wouldn’t get confused.

What you get for the interior kit is a very full box of beautifully detailed parts. The thing that made this model sing for me was the four sprues packed with individually molded 88mm shells – all beautifully done right down to the fuse cap on the ends – enough for a full ammunition load and then some.

As a consequence, I felt obliged to start with them, as no tank is worth a thing without the ammunition to do its job. The shells were all carefully cut off their sprues, cleaned up and painted. Both armor piercing and high explosive shells are included, although they’re a little hard to tell apart at first – just look for the nose fuse on the armor-piercing shells.

Once those were prepped it was time to move onto the tank itself. You can perform a few initial assemblies of the primary kit before you have to switch over, as the torsion system is installed very early in the assembly. If properly assembled, you will have essentially a working torsion bar system for the suspension. The value of this is somewhat limited by the fact that a) plastic is not steel and doesn’t flex uniformly, and b) you’re going to be installing rigid tracks anyway. However, as Meng also offers a separate kit of individual track links, this would be a really useful feature under those circumstances for diorama work.

As you move forward on the interior build, it becomes quite apparent that Meng has left literally nothing out. Every layer of construction of the actual beast is meticulously represented in detail. This allows a modeler the chance to create virtually any assembly scenario they can imagine, from a factory floor scene to a full engine replacement. Nothing wrong with that!

After a basic crew compartment assembly, the work focusses on the engine compartment, complete with engine, air cleaning system, and fuel tanks. Unfortunately, if installing the engine, you’re going to lose a lot of the wonderful detail on the lower part of these bits. As I said, an engine replacement scenario would eliminate that. Also be aware that the engine is a VERY snug fit into its compartment, and I had to flex the side walls out substantially to squeeze it into position. If I were to do it again, I’d leave the side walls off altogether until the engine is installed properly.

Once the transmission and radio were completed, I found it a relatively simple process to pop the finished ammunition into their racks, rather than assembling the racks separately and installing them as a piece. Obviously, how you approach this particular aspect of the hull build is strictly up to you, but there is some flexibility possible.

One of the things you’re apt to encounter as you delve into this very complicated build is the marginal tolerances engineered into the kit. Everything fits beautifully – as long as you don’t build up any surfaces with paint. Unfortunately, because of the nature of the kit, you’re essentially forced to paint things as you proceed, so these very tight tolerances become an issue as you assemble this model layer by layer. I found myself having to shave holes larger or trim tabs smaller (or completely off) to make things fit during the latter stages of the hull build. Test fit everything.

Late in the build, I was confronted with one of the niggling bugaboos of this model – sometimes vague or overly complicated instruction steps. Because of this (or my own shortcomings), I managed to build the turret ammunition racks not only backward but upside down as well! Fortunately, I was able to pry most of it apart before it had completely set, and the shells themselves mask the worst of my indiscretions, but just be aware that this is a surprisingly tricky stage in assembly.

Once again, as in the hull build, you will find yourself agonizing over minute multi-piece assemblies in the turret only to have them disappear under additional layers of detail. Some parts are simply very difficult to assemble as directed – largely because of Meng’s attempt to make everything in scale, which renders a lot of pieces quite fragile. However, with some diligence, you can make a very nicely detailed turret interior indeed.

At this stage, the interior work was essentially complete and I moved on to the exterior build. If you elect to purchase this interior kit along with the basic kit, be forewarned. One failing of the instructions is that there are few indicators in either kit as to when each assembly should take place – and believe me, there is a definite sequence in which these need to take place if you’re going to avoid serious problems. Use extreme caution as you proceed, lest you find yourself in an awkward position halfway through the build.

My overall perception of this kit is a bit mixed, to be honest, possibly due to the complexity of the build. Time and time again I found myself involved in detailed assembly, followed by careful painting, only to have my work disappear under other layers of assembly. Any way you look at it, this is an extremely complicated kit overall – possibly the most complex model I can ever remember tackling – with the associative hours needed to complete it. It was sometimes quite challenging due to having to skip back and forth between the exterior and interior kits, but if you’re looking for a lot of “bang for your buck” in terms of leisure time, this is certainly the kit for you. There are now (at last count) at least four different kit manufacturers out there with complete-interior Tigers in their inventories. How this kit compares to the others I have no way of knowing, but I would have to say it’s got to be in the top echelon just in terms of fidelity. I can certainly recommend it to those who like a real challenge and are willing to dedicate a fair amount of free time to it.

My thanks to Meng for creating this fascinating modeling challenge and to IPMS/USA for letting me take a shot at it.

Completed interior with turret
Previous Next