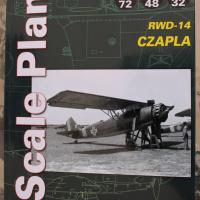 The RWD-14 Czapla was a light, two seat observation aircraft designed during the middle thirties by the RWD Design Team for the Polish military forces. It was intended to replace the Lublin R-XIII. Due to its extended development time, and relatively low performance, it was viewed as a stopgap measure until the LWS-3 Mewa became available. Just over 65 RWD-14’s were built, and these equipped five Polish Air Force squadrons at the beginning of the war in 1939. Most were destroyed during the German invasion, but 14 survivors were passed on to the Rumanians, who used them during the war. Several were captured by the Germans and Russians, but these were not used by them. None survived the war.

The book is basically a collection of very high qualify line drawings of the RWD-14 series aircraft, in 1/72, 1/48 and 1/32 scale. Most of the pages are double sized, and fold out to allow full coverage of the aircraft. Aside from identification labels, there is almost no explanatory information, only the drawings. The drawings are better than I have seen anywhere else, and include full top and bottom views, both side views, and direct front views. In addition, the engines and machine guns are illustrated, both in scale. There is almost no text included.

It is refreshing to see MMP coming out with detailed information on some of these more obscure aircraft. I hope that they continue to cover aircraft that other publishers have ignored up to this point. There are kits of this aircraft in 1/72 scale, and this book will certainly be of valuable assistance in building a quality model of the type.

Fortunately, this is a relatively inexpensive book at $11.99, and it is worth getting if you intend to build a model of this plane. Thanks to Casemate and IPMS/USA for the review copy.