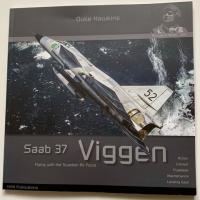 Saab has a long history of producing excellent fighter aircraft that are often at the leading edge of technology. The AJ 37 Viggen is a prime example of that legacy. Pied and Deboeck tell the story of this potent fighter through pictures and their associated captions. This book is part of HMH’s “Aircraft In Detail” series that is now up to a dozen volumes of front line fighter aircraft with the exception being one about the C-130. Most of the photos are of the two Viggens flying with the Swedish Air Force Historic Flight.

When the review sample arrived, I was immediately impressed by the elegant looks of the book. It’s 82 pages are printed on thick, high-quality paper with most of the work taken up by crystal clear photos and their associated captions. After several pages with pictures of the different versions of the Viggen, the rest of the book has close-up “walk-around” photos of systems and various sections of the aircraft itself. Starting with the forward fuselage, photos take you through the plane right to the exhaust with its unique thrust-reverser.

These photos are an exceptional resource for anyone building a model of the Viggen. What excellent photos, they are! Even if you are not into super detailing, you’ll enjoy this book for its vivid, detailed, color photos. I highly recommend HmH’s Saab 37 Viggen for anyone interested in this fighter or modern fighter aircraft in general. After reviewing this book, I was inspired to dig out my models of the Viggen and maybe, you will be too.

My thanks go to HMH Publications for providing this book for review and to IPMS USA for the opportunity to do the review.