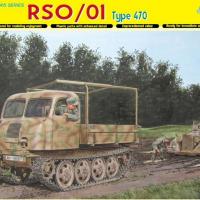 It has been 35 years since a Japanese firm named Peerless released their 1/35th scale kit of the Raupenschlepper Ost (RSO), a fully tracked vehicle designed to help deal with the thick mud of the Eastern Front’s “roads” which eventually turned to slippery, icy mud with the coming of winter. The Peerless kit (Peerless/Max in North America) molds eventually found their way to Italeri, where they soldier on to the present day. This kit of the RSO/01 is Dragon Models’ second release in a series of RSO vehicles, this kit being a standard cargo version. It is a state-of-the-art kit that surpasses the Peerless/Italeri kit in every category.

Dragon’s kit is laden with parts, over 320 on ten sprues, plus a bag of 144 Magic Tracks, and an additional 2 frets of brass photo etched parts. A small decal sheet providing markings for seven different vehicles is also included, together with a set of instructions divided into 12 assembly steps. The injection parts are flash free, and none of the parts on the ten sprues suffered from any sink marks or ejection pin marks. The Magic Tracks, while beautifully detailed, each have one ejection pin mark on them. These are extremely small and almost invisible once assembled and installed on the model. If you are super picky, you could carefully remove the ones on the lower track faces, or judiciously place a little “mud” over anything that offends you!

Things progress reasonably well through the various constructions steps, although one must always stress with Dragon Models’ instructions to study them very carefully as they are at best very busy and, at worst, confusing. The kit comes with a well detailed representation of the vehicle’s engine, down to separate parts for the cylinder heads. Everything fits fairly well during the construction of the engine (Steps 1 & 2) with the exception of part E5, which for me was a bit confusing to figure out where exactly it went. In Step 3, the construction of the road wheels, there is a major mold seam on each of the wheels – it’s not a deal breaker, but it took a bit of scraping and sanding to remove. The hub of each wheel sees the modeler attaching a small photo etched part, MA3. The problem is that the two small holes on these parts aren’t large enough to fit over the wheel nuts of the road wheels, parts B4. This is a real pain, as drilling through photo etched brass to enlarge them isn’t the easiest process in the world. However, check reference photos, as many RSO’s don’t appear to have these hub parts, so you could just as easily ignore them altogether. The attachment point of the pairs of road wheels to part B1/2 isn’t the most secure or sturdy, either, so care must be taken to assure a good alignment and that the parts aren’t banged about and thus dislocated during the construction process.

Additional areas to watch for during construction: make sure that you glue together the correct parts for the drive and idler sprockets. The round locating lug on the inner surface of the drive sprocket parts is larger than that of the idler sprocket parts. The drive sprocket is the unit that has the manufacturer’s name on it. Also note that part B21, sprocket, isn’t numbered on the sprue, but since the other sprocket/idler parts are, B21 is the one left over! The axle/differential assembly is a bit of a headache, due to the number of parts and the need to have everything lined up correctly. One could certainly use an extra pair of hands, but just be careful and test-fit before applying glue, and you should be fine.

Another problem area concerns the idler axle, part A20 in instruction sequence 3, and the idler mounts (A9 and A10). Dragon gives the modeler alternative photo etched and plastic parts for the vehicle frame front plate. The PE parts are MB1/2 and MB5, while the alternative plastic part is E13 (listed as not for use in the Parts List). However, Dragon messed things up in their instructions, and to get things to fit properly, you need to use parts E16 (idler axle) and E20/21 (idler mounts). This is yet another example of Dragon’s issues when they keep upgrading their models as they release new versions. Parts A20/A9/A10 are used on a previously released RSO version.

Make sure you keep either the idler or the drive sprocket unglued before you install the tracks. Mount the tracks starting with the glued sprocket, and then rotate the unglued sprocket to align the tracks before applying glue to it. Otherwise, you run a distinct risk of having the tracks misaligned.

When it comes to assembling the cab during instruction sequences 9 & 10, the following areas require careful attention. Be very careful with the clear window parts, as the plastic is hard and is easily fractured when removing the parts from the sprues, thus marring their appearance on the finished model. Dragon provides self-adhesive paint masks for the windows, which is a great bonus. However, if one is very careful, the windows can be glued to the cab at the very end of the construction process, and thus you would not need the window masks.

Dragon missed out providing the modeler with the RSO’s cab instrument panel for some reason, and also the windshield wiper motors on the interior of the cab roof (separate wipers on the exterior are provided). There should be two seats installed inside the cab, but Dragon’s instructions indicate only one is to be installed (parts H36/37/39). Checking with the parts layout map, Dragon indicates the other seat isn’t to be installed, but this is incorrect. So make sure you assemble two 3-part seats and carefully install them. The fit on both is poor at best, and they are fragile once installed. And when it comes time to install the cab shell to the vehicle floor, take care to align things properly. The fit tolerances are tight when bringing the cab shell together with the rest of the cab interior. I added the windows after everything was glued into place to avoid the risk of them popping free.

The final stages of construction consist of the vehicle’s rear cargo bed, and this went together without any problems. The kit includes separate snowshoe parts which can either be installed on the tracks (not shown in instructions) or along the outside of the cargo bed, as I have done.

Dragon provides a small decal sheet, printed by Cartograf, which holds decals for seven different vehicles in various paint schemes. Only two of the schemes are actually identified by unit, while the other five are simply listed as “unidentified unit” and a year. For my model, I chose the markings for option 2 Ski.Jg.Div. Eastern Front, 1944. Dragon shows this as one with a winter whitewash scheme, but I chose not to apply a whitewash, and instead went with an overall Panzer Dark yellow scheme, with Panzer Red/Brown and Panzer Green mottle effect. Tamiya paints were used throughout, including a new Tamiya color XF84 Dark Iron, which I utilized to paint the tracks. The tracks were then given various applications of rust-colored pigment and rust-colored oil paint washes, as was the vehicle muffler.

The end result of all this is a very nice model of the RSO/01 Type 470, far nicer in my opinion than the old Peerless/Max/Italeri version of 30+ years ago. However, given the poor Dragon instructions, extreme care must be taken to figure out how to construct the model accurately, and care also needs to be exercised when assembling the fragile running gear and the cab seats, for example. If the modeler is able to achieve all this, a very fine model can be built. I just wish Dragon would use more caution when it comes to designing their instructions, as the confusion that results from the poor instructions really does detract from an otherwise first-rate product.

I would like to offer my sincere thanks to Dragon Models USA for providing IPMS USA with this review sample, and IPMS for allowing me to review it.