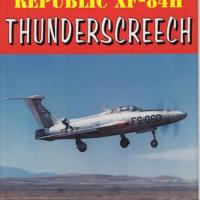 Ginter Books has been producing books geared towards modelers for many years now, starting with various naval aircraft and later branching into Air Force aircraft (hence the Air Force Legends subtitle). There is always a short history on the development of the aircraft in mention followed by test and photos that highlight various aircraft systems that would be of interest to the modeler, ending with a short review of the plastic or resin kits of said aircraft.

There were several things that I learned from this work that I had not known before ( or had forgotten), such as the Air Force wanted to build two supersonic propeller test vehicles and they were initially to be designated as the XF-106. In addition, the XF-84H was the first US aircraft to be built with a Ram Air Turbine (“RAT”), which when deployed into the airstream spun a pinwheel and generated electrical and hydraulic power. Apparently the Air Force may have hoped that this project would be successful and be developed into a viable combat aircraft because the XF-84H was completed with space and weight provisions for a T-45 .60cal, 1,200 round Gatling gun in the nose; twenty-eight 5inch HVARs on the wings and provisions for up to 4,000 lbs of bombs on the two wing pylons.

The last section of this book deals with comments on four kits. They being the Main Track 1/72 vacuform XF-84H kit number PX-030, the Anigrand 1/72 resin XF-84H kit number AA-2059, the Execuform 1/72 XF-84H kit and finally the Collect-Aire model 1/48 resin XF-84H kit #4835. This last one was not reviewed as Mr. Ginter didn't want to pay eBay prices to obtain this kit, but included it as it was made. The comments made on the other three kits would be helpful in deciding which one to buy.

It's a shame that this unique aircraft only flew twelve times, but the terrible noise generated by the propeller blades while on the ground caused an early termination to the program. It was so bad that the ground crew couldn't go near it till the engines were shut down. During testing the aircraft was not allowed to taxi to the runway on its own power as the noise was too much for the tower personnel to take, the plane had to be towed to the end of the runway and then start it's engines for takeoff.

I completely enjoyed reading this new volume that Steve Ginter has produced and I can highly recommend it to anyone who has an interest in the Republic F-84 series of planes. I want to thank Ginter Books and IPMS/USA for the chance to review this book.