Home is the Halifax 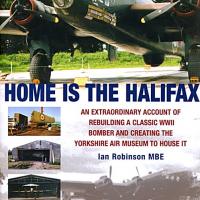 The Handley-Page Halifax was one of Britain’s best 4-engined bombers but, like the Hurricane to the Spitfire, was overshadowed by the Avro Lancaster as a media darling. It didn’t help that no original Halifax airframes existed in the world, outside of a sorry example pulled from a Norwegian fjord in the early 70’s and displayed in an un-restored state at the RAF Museum in London – a pitiful state of affairs.

In the early 1980’s, a nascent aircraft enthusiast group in Yorkshire, heard about a section of Halifax rear fuselage being used as a chicken coop in the wilds of the Shetland Islands off the Scottish coast. Following its recovery the daring plan to create a complete Halifax facsimile was conceived. This book is the story of that project, and the museum that was born from it, from start to triumphal finish in 1996. It’s a museum I have had the privilege of visiting on a couple of occasions and had a thoroughly enjoyable time on both visits. Seeing Friday the 13th, as the airframe is know, is a tremendous experience.

The author, Ian Robertson, was one of the leading instigators of the group and his story is told in an informal and anecdotal but informative style, in some ways reflecting the manner in which the project was carried out. The book has the feeling of a scrapbook, with stories and reminisces scattered throughout alongside personal photos, which are not always of the best quality, but with some really interesting historical data and photos incorporated.

Sadly, as reported in a recent issue of Flypast magazine, Mr. Robertson passed away earlier this year shortly after the book was finished. As such, the book stands as a lasting memorial to Mr. Robertson and his dedication to the Halifax and the Yorkshire Air Museum.

Not a modellers’ book by any means, but if you enjoy aviation history and preservation, this will be of interest. And should you happen to be in the area of York, not only is the historic and picturesque city well worth a visit, but a side trip to the Yorkshire Air Museum is highly recommended as well.

Our sincere thanks to Casemate Publishing for the review sample.