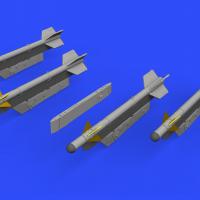 In conjunction with Eduard’s release last summer of its new MiG-21MF kit, Eduard released several photo-etch and resin accessory sets for the kit. This set is actually the combination of two other sets: MiG-21MF pylons (672 184) and R-3S missiles for MiG-21 (672 185). As a result, the set not only provides replacement pylons for all five stations, but also four R-3S (“Atoll”) air-to-air missiles and their associated launch rails. Buying this set instead of the other two sets individually will also save you a few bucks as the suggested retail price of this set is $3 cheaper than the combined price of the other two sets.

The set is comprised of five resin pylons (four underwing and one centerline), four resin missile bodies with fixed rear fins, four resin missile launch rails, four resin seeker head covers, a photo-etch fret of the forward guidance fins and the rocket motor nozzles (4 sets), and a decal sheet. The instructions include a painting and decaling diagram as well.

I first washed all of the resin parts to remove any remaining mold release agent, and then I removed the pylons and the missile bodies from the pour stubs with a fine razor saw. Next I used a fine sanding stick to clean up the cut lines on the trailing edges of the pylons and the missiles and the rear edges of the fixed fins as there is a little flash on the fins. If you intend to display the missiles with the seeker head covers on, you have to cut off part of the missile nose, so I would recommend doing it at this point before you attach any of the photo-etch to avoid breaking or bending the etched parts.

The pylons are drop in replacements for the kit parts and require the same holes to be drilled out as the kit pylons do. There are small holes on the underside of each wing pylon which match up to the pins on the top of the missile launch rails, however, the holes are much too shallow, so I used a micro drill bit in a pin vise to deepen the holes. I also slightly widened the slot in the pylon aft of the second hole as there is rounded bump on the top of the missile launch rail that should sit in this slot. Dry fit each pylon and launch rail assembly as you go and once they fit together the way you want them to, glue them together and set them aside.

Next, I carefully removed the photo-etch parts for the rocket nozzles. These parts are “+” shaped as they include not also the nozzles, but also some small bumps that attach to the back of each rear fin. Take your time on this step as the slivers of etch that connect the bumps are very thin and easily bent. First I got everything lined up and to ensure that the arms of the “+” were correctly oriented, then I started by gluing one of these in place. I next glued the nozzle area on, followed by the other three arms. By using slow setting superglue, I had time to adjust and align things before the glue set.

Once the etch pieces had set up, I cut out one set of the forward guidance fins and used a sanding stick to remove the burrs from the attachment points. I applied a small bead of superglue on the fins, one at a time, and inserted them into the provided slots in the forward missile body. Check the alignment as you go as the fins should be symmetrical all the way around and in line with their respective rear fin. Once everything lined up, I sprayed a quick shot of accelerator on the superglue to set it.

Painting is very simple: the pylons and launch rails are the underside color of the aircraft you are modeling (in my case light blue) and the missiles are overall white. If you have decided to install the seeker head covers, these are red. Once the paint had dried, since I was not using the seeker head covers, I dipped the nose of each missile into the cap of my Testor’s chrome silver to create the seeker head. After the paint dried, I sprayed on a couple of thin coats of gloss/Future on the missiles and the pylons/rails to prepare the surfaces for decaling. Eduard’s decal sheet is very comprehensive, however, for some reason it does not include the thin black band around the fuselage just aft of the forward section on the missile and since it is the decal sheet from the R-3S missiles set, there are no decals for the underwing pylons. Since Eduard’s MiG-21MF stencils decal sheet includes four of the stripe and full stencils (plus extras) for the pylons, I borrowed the stripes and pylon decals from one of my MiG-21 kits. There are 3 or 4 decals for each pylon, 6 decals for each launch rail and 16 for each missile, so you will need to set aside a little time for decaling. The decals are typical of Eduard’s new kits and they snuggle down very nicely, even over raised details, with Micro Sol and Micro Set.

After the decals had dried, I applied a thin black wash to the nozzle area to highlight the nozzle. I then sealed everything with another coat of gloss/Future, followed by a final coat of clear flat. Once everything was dry, I attached the pylons/launch rail assemblies to my MiG-21MF kit (do this after you have decaled the MiG-21 and installed the landing gear and landing gear doors – trust me!) and then I glued the missiles onto the launch rails taking care to ensure that they were in the “X” configuration on the launch rails.

This is a really nice set and while it is designed for Eduard’s MiG-21 kit, I suspect with just a little work modifying the underwing pylons, you could use it on other MiG-21kits.