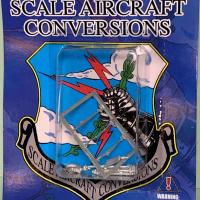 This set is designed to provide replacement parts for Hobby Boss’ 1/72 A-4F Skyhawk kit. As with most of SAC’s landing gear sets, the metal parts are intended to be one-for-one replacements for the kit parts. The set consists of the nose gear strut, port and starboard main gear struts and retraction/extension arms for all three of these.

Like the kit part, the nose wheel is cast with the nose strut. SAC has also cast the nosewheel steering (part C21) as part of the strut, however as the arms on this part are very thin, they are easily bent, so take care around them. The set also includes the retraction/extension actuator for the nose strut, however, as the actuator is very skinny, it is easily deformed and when I first looked at it, I thought it was a brake line as the one in my set was pretty curvy.

The main gear struts are single pieces, with single piece retraction/extension actuators. The actuators are cast on the same tree as the nose gear actuator and were also bent on my set. I suspect that this the result of the parts being removed from the molds as they are very thin and white metal bends easily.

The parts are all well cast, but all of the parts have a slight mold/cast seam with is a little more pronounced that the mold seam on the kit parts, however it is easily cleaned up with a sharp Xacto knife. There is also a small divot on the underside of the small nose gear door that is molded as part of the nose gear strut, which required a little bit of filler to address.

This a nice set but as with most 1/72 scale sets the parts are pretty thin/skinny and are easily distorted or bent, so you will need to be careful about not bending them, especially once they are painted.

Thank you to Scale Aircraft Conversions for the review set and to IPMS-USA for letting me review it.