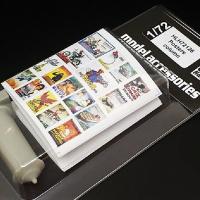 One of Haulers latest diorama accessories is a 1/72nd scale poster column. (They also offer a 1/48th scale poster column.) These advertising columns were ubiquitous throughout Europe during the early portion of the twentieth century. In many cases a version of these poster/advertising columns can still be seen in Poland, Germany, France and elsewhere.

I haven't located any definitive evidence but it appears as if Hauler may have inherited this kit from Tiger Productions. Scalemates website currently lists this kit as having been issued by Tiger productions in 2011. Tiger Productions may have been affiliated with Black Dog (https://blackdog-model.com/), a maker of resin structures and diorama accessories. All of which is speculation but it makes sense in my head.

The kit consists of a single resin bit that is the poster column and a small sheet of advertising posters. Assembly is a breeze as all that is involved is removing the pouring stub from the resin column. Having done that, it's simply a matter of applying an appropriate hue of paint. I chose to leave the pouring stub on my example as I intend to imbed the base into it's eventual resting place.

Along with the resin column, Hauler provides a small sheet of posters to adorn the column. The posters will need to be cut out and applied separately. The sheet of posters on my review example seem to have been hurriedly cutout as some of the posters have clipped edges. (Something easily remedied with some judicious placement.)

Among the images are a few tire advertisements (Dunlop and Michelin), Art Nouveau style advertisements for liquor and travel, a handbill for 'Buy a Lamp Day' ( A WWI program in Britain), WWII-era Russian propaganda posters, a few movie posters (Charlie Chaplin in 'The Kid,' etc.) and other odds and ends from the 1920's through the 1940's.

Also provided are various Nazi propaganda posters along with a couple of campaign posters ( late 1930's) for Adolph. I understand that authenticity may be the impetus for including art work that is anti-Semitic or promotes the Nazi Party but including those images, at this juncture, is without merit. A better use for those might be to stage your own 'book burn' and use them as kindling.

Setting that aside, the posters will need to be applied ( I used PVA glue) to the column and, depending on the nature of your diorama, appropriately weathered. This poster column from Hauler will definitely add an impact to your next project.