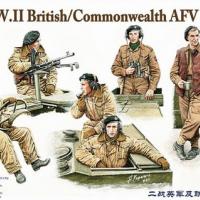 This kit contains 45 tan styrene parts that will create six British or Commonwealth tank or AFV crewmen. Four wear the late 1944 – early 1945 one-piece “Pixie suit” made from water-repellant canvas with khaki lining and hood. This warm equipment had two zippers and could be converted into a sleeping bag. These four men are illustrated both wearing gloves and bare-handed, so it’s how you paint them. The other two figures are wearing the usual khaki battle dress. Everyone wears a black beret molded onto their heads. Only figures A, D and E have headphones (molded on) and, if you use the box top as a guide, you can add wires.

There was some talk online, wondering if these were MiniArt or Master Box figures, or other “copies.” Bronco used the same illustrator, A. Karaschuk, who super-modeler Chris Mrosko said already has a great reputation in Eastern Europe and has been making a name for himself here. But though there are some similarities, this set of British or Commonwealth tank or AFV crewmen is new. I believe these are the first wearing the “Pixie suit.” All of these figures have their beret molded on, but nobody has the rimless steel helmet as issued to paratroopers and AFV crew, much less goggles. That would have been a plus had they been included as options. The sculpting of the uniforms – and especially the faces – is some of the best I’ve ever seen!

Bronco’s figure A is a commander talking into the hand mic molded into his hand. He is similar to Ultracast’s resin figure #35045 but Bronco’s has the “Pixie suit” and hood, and his left hand rests on his right knee – the opposite of Ultracast’s figure.

In addition to those differences, Bronco’s figure B is similar to one in MiniArts set #35078 but Bronco’s figure is zipped (not buttoned) up and his legs are together, not spread apart.

Bronco’s driver figure C is somewhat relaxed, whereas the comparable driver of a Dingo Mk III is very tense, leaning forward as if he’s running a gauntlet of enemy fire.

I’m not aware of anybody else with a figure similar to Bronco’s D.

Bronco provided a one-piece resin commander for their Humber Scout Car Mk. I resembling actor Michael Caine in a pose from the movie A Bridge Too Far. People questioned if this Bronco figure E was one and the same. They’re not. Figure E has a different face, is composed of 11 parts, and is posed to grip his vehicle’s structure with both hands (the resin figure uses one). This figure has binoculars and is the only one in this set with his web holstered British Enfield .38. An alternative left arm and hand are provided.

Bronco’s figure F is similar to Ultracast’s resin #35035, standing with legs crossed, wearing an open leather jerkin, holding a cup of tea. Bronco has his opposite legs crossed, and there are other fine differences. Our cup is not filled to the brim, which looks realistic painted so long as the cup is held level. The back half of the leather jerkin is molded onto the figure. A left and right front jerkin panel are included to provide a more realistic, poseable look.

There was hardly any mold seam on the figures that needed to be cleaned up. The faces are all sharply defined and the detailed clothing makes painting and shading a breeze. As mentioned earlier, I consider the sculpting some of the best I’ve ever seen! I used very little epoxy putty to fill seams between parts. Assembly was very simple. Each figure consisted of head, arms, torso, and two legs. Ignore the Bren gun pictured on the front cover – it is not included and is just a suggestion for posing a figure. Use the side-opening box’s excellent box top illustration and the bottom’s basic line art drawings of each figure assembled and painted for your color guide. The bottom also shows the sprues with all the part numbers keyed off, along with paint numbers color-coded for Gunze Sangyo, Hobby Color, Humbrol, and Tamiya paints.

As I write, there aren’t many injection molded British or Commonwealth tank or AFV crewmen available in 1/35. I believe these are the first wearing the cold weather “Pixie suit” and Bronco should be commended for it! More sets of British tankers are promised by different manufacturers and will be warmly welcomed. I’d love to see Bronco and the other companies produce figures of the top scoring British, Commonwealth, and American crewmen. Even optional headgear as mentioned, along with open holsters with separate pistols, decals for their rank, and unit insignia. And since someone at each company has invested a lot of time researching the figures’ uniforms, weapons, and equipment, it would be excellent if they printed out some of that information for us. For example, in this British/Commonwealth figure set, everyone has a unit’s badge on his beret. I’m not expert on British unit badges, so I could not identify them. To be 100% accurate, you should know the man’s unit so that you place him in or on a vehicle from that unit. Someone at Bronco probably knew them and it would have been an excellent bonus for us if they passed that information on to us on the box or a small paper insert. None of these are complaints against Bronco, as they apply to all figure companies. Indeed, they are simply “value plus” suggestions that could raise the bar for future figure sets.

Thanks to Dragon, who is the U.S. distributor for Bronco kits, for the review sample. Thanks to Bronco for seeing that WWII-era British and Commonwealth AFV crew had been long neglected, and for filling the need. Bronco seems to be very busy releasing long sought-after British vehicles, artillery, and figure sets, and each and every kit is a welcome addition to every modeler’s collection. Thank you Bronco for hearing us and fulfilling our needs! I can highly recommend these British/Commonwealth figures to modelers of every skill level. Not only is the subject matter very welcome, but the quality of sculpting and molding is right there with the best of them. Thanks to IPMS/USA for providing me the opportunity to review this set.