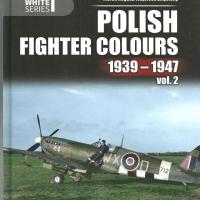 The Polish Air Force during WWII fought in many fronts, under many different camouflage schemes and with a very large variety of aircraft. During 1939, it fought over Poland and later it became an “Air Force in exile”, fighting alongside first with the French Air Force first and the Royal Air Force later.

It should be pointed out that, while incorporated to with the RAF for operational purposes, the Polish Air Force remained an independent Air Force (hence the small checkerboard with Polish markings near the nose of the airplane) under control of the Polish Government in exile, in London. While there also were Polish pilots in the VVS (Soviet Air Force) those squadrons were not under control of the Polish Government in exile and they were effectively a regular Soviet squadron, which was staffed with individuals of Polish-origin.

This is the second volume of the series devoted to the Polish Air Force between 1939-1947 and it covers the following airplanes: Spitfire IX and XVI, Mustang I, III and IV, Hawker Typhoon and Tempest, Curtiss P-36 and P-40, Republic P-47, Bolton Paul Defiant, Bristol Blenheim and Beaufighter IIF, VIF, Douglas Boston/Havoc/Turbinlite, De Havilland Mosquito NF.II, FB.VI, XII, XII and NF.XXX, Yakolev Yak-1/-3/-7/-9, Bell P-39Q, Polikarpov I-16 and UTI-4, Lavochkin La-5FN and La-7. In addition to those airframes, there is a selection of other airplanes test flown by polish pilots, like Gloster Meteor, De Havilland Vampire, Wildcats, Hellcats and even captured airplanes, like Ju-88, Cr-42, Fw-190 and a variety of Bf-109s.

Each chapter is devoted to an airframe and within each chapter there is a section that describes the relevant Polish Air Force Squadron that flew the airplane and then other Polish pilots that flew the airframe with other Air Forces (like in Polish personnel in exchange with the RAF or the USAAF).

In some cases, and as a testament of the Polish pilots’ skills and training there are airframes that were flown by Polish pilots acting as test pilot, including several prototypes and jet airplanes.

At end of each chapter, there are several color profiles (and even some top-views) of specific airplanes flown by Polish pilots. Each profile is accompanied with period pictures and a description of the camouflage, the colors applied and, in some cases, they even provide the location of the airplane and the pilot that flew it.

There is another chapter devoted to the general details of camouflage colors, scheme and markings, and later there are specific chapters for each airframe flown by Polish pilots.

I have scanned a few pages to indicate the quality of the images and color profiles and you can find a video with all the pages at https://www.youtube.com/watch?v=-d0qqXv7tA4

This book is an excellent resource for the aviation history aficionado and a source of inspiration for the modeler.

I would like to thank Casemate Publishers, Mushroom Model Publication and IPMS/USA for the review sample.