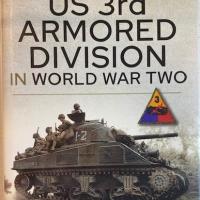 Darren Neely is the author of several photo survey books on WW2 subjects including Panzer wrecks 21: German Armor and the forthcoming Operation Nordwind in the Images of War series.

The book is divided into four unnamed chapters covering the 3rd at the invasion of Normandy until the end of the war.

The book is hardbound has 4 chapters and 306 pages. Most of the pages have at least two black and white photographs on each of them. Some of the subjects covered in the book include:

The introduction and effectiveness of the M-26 Pershing, now the United States had a tank that could take on the Panzers and Tigers (introduced after the Battle of the Bulge).

This book is not much of a story book, instead it is filled with black and white pictures of the daily life, movement of the 3rd Armor division. There are two-page descriptions at the beginning of each chapter about the major phases and movement of the 3rd then the rest of the chapters are photographs activities. For anyone interested in the 3rd Armor division or wanting reference photos of vehicles (Allied and German) this is a great book.

I want to thank Casemate and IPMS/USA for the opportunity to read and review the book.