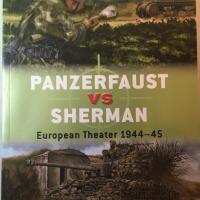 Osprey's Duel series is a well-established line of books providing an overview of machine-on-machine combat action from design and development through combat. The books include a thorough analysis of the elements which affected the overall outcome of specific battles, or operations.

This volume focuses on Germany’s development of the anti-tank weapons that could be carried by a regular infantry soldier, or specialized team of soldiers, with enough firepower to knock out a tank. To deal with the surprising threat of Soviet armor on the Eastern Front. Focusing on primarily on the Panzerfaust and the Panzerschreck, the books takes the reader from the improvised weapons soldiers used thru the development of the Panzerfaust and Panzerschreck. The Panzerfaust revolutionized anti-tank warfare, and showed that a weapon with a relatively small shaped charge could make one man a serious threat to armored vehicles. The weapon’s introduction on the battlefield, also revolutionized the way armored forces respond to the threat, including many similar methods used today on modern armor.

Like most Osprey books, this title starts out with a brief history of the weapon’s development and deployment. The Faustpatrone, or “Fist Projectile”, was originally deployed to the Eastern Front in October 1943. Hitler later renamed the weapon the Panzerfaust, “Armor Fist”. The weapon proved so successful, production went from 40,000 per month in October 1943, to 1.5 million per month by the war’s end. During that time, development of the Panzerfaust went from a 1.8 lb warhead, with an effective range of 30M on the Panzerfaust 30 (klein), to a 3.5 lb warhead and 100M effective range on the Panzerfaust 100. There was even a Panzerfaust 150 design created, and possibly produced, which very closely resembles a modern-day rocket propelled grenade, with a reusable launch tube, rather than the disposable launch tubes on earlier models. The book gives a brief history of the Panzerschreck, but the main focus is clearly on its cousin the smaller Panzerfaust.

While the Panzerfaust was created in response to fighting on the Eastern Front, the book focuses solely on its use in the West. Specifically, during the Allies Normandy campaign. While the allies had been the first to successfully deploy shaped charge weapons, specifically the bazooka, they hadn’t prepared to defend themselves against those weapons. The book goes into great detail about the success of the Panzerfaust and Panzerschreck in Normandy’s bocage, and then describes the various methods used to improvise defensive armor for the vulnerable Sherman tanks. It was particularly interesting to read about the field modifications that were literally made overnight to protect the Shermans. The descriptions of the steel cage, with sandbags was something I wasn’t very familiar with, and is definitely not something I’ve seen on a model.