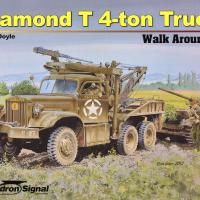 At first glance, the Diamond T 4-ton Truck looks like the “Deuce and a Half” (2½ CCKW GMC series) on steroids. The U.S. Quartermaster Corps and Corps of Engineers needed a truck that could do everything the “Deuce and a Half” could do – and much, much more. The Diamond T 4-ton truck filled the bill, serving throughout WWII in all theatres. But the Diamond T had one major problem: it cost as much as twice that of the CCKW! So it was bought in smaller quantities and served the U.S. Military just over 10 years. It was the basis upon which the post-war M-34/M-35 2½ trucks and M-41/M54 5-ton series were based.

David Doyle, the book’s prolific author, dives right into the Squadron/Signal Publications Walk Around format, delivering five period photos, two color illustrations, and 232 color photographs with concise captions based upon the finest preserved examples of the classic Diamond T. For the uninitiated, “Diamond T” was the name of the American Chicago-based manufacturer of successful motor cars and rugged trucks. It seemed as if there were hundreds of car/truck manufacturers in the U.S. before WWII, but after the war’s end it fast became survival of the fittest. Jumping ahead, by 1967, Diamond T was a subsidiary of White Motor Company, which merged with Reo Motor Company to become Diamond Reo Trucks, Inc. The U.S. would get a further 50 years of service from trucks based upon these WWII 4-ton Diamond Ts! Many are still in civilian service throughout Europe.

Like the smaller 2½s, there were numerous variants of the 4-ton Diamond T, and each had its own designation. Early war saw closed cabs, while later war vehicles had open or soft top cabs to cut down the use of sheet metal. Diamond T provided long- and short-bed personnel and cargo carriers/artillery prime movers, pontoon bridge carrier, dump trucks, and twin boom wreckers, which comprise about half of this book. Appropriately so, as the Diamond T wrecker served as the "U.S. Army’s standard medium wrecker during World War II and after.”

It also served as the M20 tractor in combination with the M9 24-wheel trailer as the M19 tank transporter. The U.S Army Ordnance Corps Supply Catalog refers to it as the G159. The M26 replaced the M19, using the same Hall Scott 440 engine. M20s continued to haul ammunition once relieved of tank transporting duty. If Doyle mentioned this version, I missed it. Matchbox released the M19 tank transporter in 1/76 scale and it has been re-released by Revell, I believe. A Romanian company, Wespe, has released kits of the Diamond T in numerous variants, including the wrecker, in small braille scale as well as 1/35 scale. Rumor says Mirror Models has the Diamond T for a future release.

If model manufacturers are scratching their heads wondering what new models they should release, instead of another “paper Tiger” (i.e., a German vehicle that never made it past a sketch on a napkin), they need not look further than this book. There are still many Allied wheeled vehicles that have not received the attention they deserve.

The Walk Around format limits the author to photos of existing, restored vehicles. The great news with this book is that there are plenty of photos of almost every conceivable detail modelers could want. The cabs are well documented, inside and out, and even underneath the vehicle. Mr. Doyle has pointed out instances where a modern, non-original item has been added, so the modeler doesn’t add it to his WWII-era model. A problem with this format is the fact that not all variants have been found and photographed. There is just one photo of the dump truck, and just two photos of the engine, each in period black and white. One photo shows just one of the brackets for installing an M36 machine gun mount, but otherwise the front and rear cover illustrations are your only other references to two different machine gun mounts. Some of the older Walk Arounds included line drawings to clarify certain details, and more illustrations that showed more examples of the vehicle with camo and markings in service. I miss them.

A winch of 40,000 lb (18,000 kg) capacity, chain driven off the auxiliary transmission and intended mainly for hauling damaged tanks aboard trailers, was mounted behind the cab.[1]

If you have any interest in U.S. wheeled vehicles, specifically the Diamond T 4-ton trucks in WWII, and especially if you intend to build a model of one, I recommend that you add this book to your library. You have a choice of soft or hard cover. As mentioned above, it’s not everything a modeler requires in a reference, but it is still a very good value for your money. Aside from the machine gun mounts, this book has everything you’d want to know about the closed and open cab troop/cargo carriers, and the closed and open cab wreckers.

Thanks to Squadron/Signal for providing this book for review, and thanks to IPMS Vice President Steve Collins for allowing me to review it.