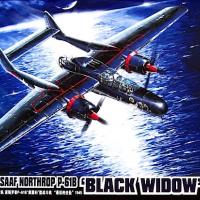 The Northrop P-61 was the US military's first operational aircraft designed specifically as a night fighter interceptor. Our subject, the P-61B, was the second major production variant derived from the type. The most noteworthy improvement to the already large and infamous twin engine beast was an upgraded radar necessitating an additional 8 inches of length to the forward fuselage. This was added just in front of the nose gear bay and behind the radome.

The Black Widow depicted in the kit, “Lady In The Dark”, is historic in that it claimed the last aerial kill of World War II.

My sample came packaged in a large sturdy corrugated box featuring beautiful art work. All the plastic parts were well protected in poly bags. The kit includes a photo etch fret, a mask set, two optional decal sets, and a 14-page instruction booklet with two very nice color plates. In addition, Great Wall included a large ready-to-frame color print of the box art. During my initial inspection, the parts looked nearly flawless with nice detailing except for the countless injector pin marks in the interior cockpit and cabin areas. The decals are colorful and in good register, but I was disappointed that they’re thick and have a matt finish. The finer points of the kit include a detailed cockpit with the gunner and radar operator’s stations, two complete engines, weighted tires, forward and aft boarding ladders, positional flight controls including the flaps, and detachable canopy escape hatches.

The first thing I did was order a set of Terry Dean’s nose weights. Anytime I build a nose-gear/tail-sitter, I always check to see if Terry has the proper nose weight. I do that for a couple of good reasons – they only cost a few bucks and they’re custom-fitted to the subject, thereby taking out all the guesswork.

Starting in the cockpit area, I found the seats to be quit nice once finished, and they really came to life after the seat belts were added and posed. The instrument panel is another nice feature. Each dial face is decaled individually; this requires some patience but is worth the effort. Moving along to the cannon bay, after careful test fitting I decided to place the cannons in position after I joined the fuselage halves together, instead of trying to weasel them through the barrel ports when mating the halves. I almost decided to close the cannon bay because the detail is so weak, so I hope the aftermarket people will come out with something that includes proper ammo chutes and belts. I also decided at this point to wait on installing the forward cockpit boarding ladder until after all the painting was finished. Great Wall included a complete cockpit decal placard set that looks great and is almost readable, but on closer inspection the small text is just a splattering of the English alphabet and makes no sense at all. The last item I decided to install later on in the build was the nose landing gear. This is a real nice item that features a tire fender and includes the landing light that’s not found on the P-61A. As I mentioned earlier in the product brief, the injector pin marks on the cockpit sidewalls are everywhere, and after a while I just gave up trying to fix them all, instead painting over them and finishing out the fuselage.

Once done with all the interior painting and fussing, I was ready to join the halves together. I found the test fit all the fuselage components, including the weights, to be pretty good but not perfect. I’ve included a photo of the elaborate clamping my sample required. Although reasonably satisfied, overall I found the interior detail lacking when compared to actual photos. I could have easily spent a month scratchbuilding the proper details.

The fuselage is that of a P-61A, so Great Wall of course just needed to add another 8 inches to make it a P-61B. This was done by adding the 8 inches of fuselage to the radome, making it (the kit part) longer. The problem is that if you want to display the radar array correctly, you’ll have to do a lot of surgery. I was seriously considering this option, but since the kit radar is very toy-like in appearance (see photo), I decided to close it up. Even so, the mating joint still has to be eliminated. This process wasn’t as easy as one would think and required a lot of massaging and rescribing.

The last two items remaining on the fuselage were the upper gun turret and all that wonderful canopy glazing. First came the .50 caliber quad gun turret, and this thing is just wrong in side profile but can be easily corrected if you’re handy with a sanding stick. I removed about 1.5mm of plastic off the top, thinning the profile down (see the before and after photos). I also decided to leave the turret off until after the painting was completed. As for the canopies, I only encountered one problem with the fit. This was at the forward windscreen area. It had a nasty gap that required a plastic shim and lots of putty blending to fix.

The engines, cowlings, and props were the next order of business. I found the engines adequate and the photo etch ignition harness a bit fussy, but overall not bad when completed. The cowl flaps can be posed open or closed. When opened, the exhaust stubs are visible and look great. The cowlings themselves look ok but are not perfect examples (minor shape issues and the openings are to small). Same for the props and spinners (they are molded in one piece). I used them and they look okay, but there are aftermarket replacements if you don’t like those provided.

The wings and twin tail booms went together pretty well. The wings, flaps, and ailerons are molded separately and can be posed as desired. The intercoolers are just blanked off and could use a little scratchbuilding to correct them. One other point worth mentioning deals with the speed brakes. The instructions would have you instal them backward if you were to pose them in an open configuration, and the easy fix is just to turn them around. For what it’s worth, I couldn’t find one photo where they are open when the aircraft was parked. The booms have positional rudders and somewhat detailed gear bays, but are also plagued by injector pin marks. The main landing gear went together pretty well, but I encountered a problem during my test fitting. Part #I8, the hydraulic ram that moves the landing gear up or down, has a large structural casting molded on the aft end of it; one would think that it should mount to a bulkhead, but it has no attachment point! When looking into the gear bay, it just hangs out into the open air. It makes no sense at all; the instructions are vague and offer no help, so in the end I left them off. Again, I deviated from the instructions and decided to leave the gear doors and main landing gear off until after the major painting was completed.

While putting all the major parts together, things went better than expected. Once that was completed, I set about preparing the model for painting. Using the kit-supplied mask set, I found that a few of the precut masks just didn’t fit properly (too large or to small), but for the most part they were adequate. After the painting was done, it was time for the decals. I found them very difficult – they wouldn’t settle down and Solvaset didn’t help, either. The hard matt surface is almost bullet proof and, once dried, I had to rescribed them with a toothpick. After the top coat and weathering were finished, I built up the aft boarding hatch/ladder, attached it, and then I went back and added all the rest of the items I had left off.

Honestly, I like it a lot – it looks like a P-61B to me, and with a little extra effort this could be an award-winning model. I recommend it to seasoned modeler.

Realistically, the $110 price tag is kind of hard to swallow, and it’s not even close to Tamiya quality…which makes the very available vintage Monogram kit extremely attractive and at a fraction (1/5) of the cost.

I appreciate the generous people at Great Wall Hobby, Dragon Models USA, and IPMS for the opportunity allowing me to review and build this fine offering.