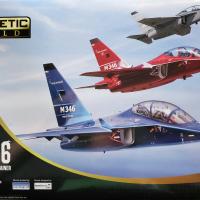 This is the first injection-molded 1/48 kit of the M346 Advanced Fighter Trainer, which first flew in 2004. It is currently used by the air forces of Italy, Israel, Poland and Singapore. It was originally a joint venture between Aermacchi and Yakovlev, and you can definitely see the similarity to the Yak-130 Russian trainer.

The kit is molded in a medium gray plastic and contains just over 270 parts. The molding is truly top notch, which is one of the hallmarks of the new Gold range of kits from Kinetic. This was the first kit produced in their new manufacturing facility. There is a small photo etch (PE) fret that contains seatbelts, the HUD frames, rearview mirrors for the inside of the canopy, various vents on the fuselage, and the small winglets. The clear parts are very nicely done with two different options for the canopy: one with the explosive cord molded into it and the other without. And happily the canopies do not have a seam running down the middle! Hooray!

The decal sheet has markings for six different aircraft including the prototype and initial production aircraft which are very striking in their all red and all blue schemes. The other four options are for Italy, Israel, Poland and Singapore. There is also a separate sheet for all of the ordinance provided. The kit has three sprues of things to hang from the wings including fuel tanks, AIM-9M missiles and GBU-12s, along with other items that you can add to your spares box.

The instruction booklet is 24 pages of clear CAD type drawings with “focused views” of the more complex assemblies. Paint call-outs are for MIG paints, but there is cross reference chart that also lists Vallejo, Mr. Color, Tamiya and Humbrol paints.

Construction starts with the cockpit, specifically with the ejection seats. They are fairly well detailed and look like pictures I found on the internet. The cockpit tub and instrument panels are very nicely detailed and look great after painting, although I didn’t do as nice a job as I would have liked. The PE and clear parts that make up the HUD displays were an interesting exercise in folding and gluing, but they look good. All the cockpit components come together in Step 3 and it all makes up into a nice, busy looking cockpit straight out of the box.

The nose gear is assembled next, and there are plenty of small parts to be attached. The instructions are clear about where everything goes and it all fits together nicely. I chose not to attach the wheels until the end of the build. I also left off parts A81 and B28, which are explained later. The main gear wells are next up, and I did find one problem with the instructions. Parts A88 and A89 are mixed up in the drawings – A89 goes on the “E” wheel well assembly and A88 goes on the “F” assembly. It’s pretty easy to figure out the discrepancy when you are putting them together. I used a Sharpie and wrote E and F on the outside of each assembly so I would know which one went where when it came time to glue them into the lower fuselage half in Step 8. Only the base of the main gear legs are part of this assembly, which I thought was a nice touch. That way you can attach the rest of the main gear legs after painting, etc.

Step 6 deals with the assembly of the intake trunks and the burner can assembly. These go together nicely, but of course there will be a seam to be cleaned up. Also, don’t forget to glue the small PE splitter plates into each intake trunk. I used Alclad Jet Exhaust to paint the burner cans.

Step 7 deals with the attaching the lower surfaces of each wing to the one piece upper wing/fuselage. Pay careful attention here as you need to decide which holes you are going to drill out for the pylons and there are also tabs to be removed depending upon whether you want the leading edge slats deployed or not. Most of the pictures I saw of M346s on the ground had the slats down, so I chose that option.

Next comes the installation of the main gear wells, the burner can assembly, and the intake trunks into the lower fuselage half. The attachment point for the burner can assembly is different than what is shown in the instructions, but it is easy to figure out how it fits. The intakes seem like they won’t fit, but they actually dropped in very easily and the fit was great. It was at this point that I began to realize how well this kit fits together, even on complex-shaped assemblies.

Next comes the nose gear bay assembly and you have to install the nose gear as part of the gear bay, which means it will be hanging out during the remainder of the construction. I purposely left off parts A81 and B28 when I assembled the nose gear back in step 4. By doing this, I was able to leave the nose gear loose and swing it up into the wheel well so that I didn’t knock it off, because I know I probably would have.

The forward part of the fuselage is split vertically, and it is now glued together around the completed cockpit. I crammed some weight in and around this assembly where I could find room. Fit here was excellent also and this assembly is then attached to the lower fuselage and then the two fuselage halves are assembled. Once again, everything fit nicely and all the assemblies were along natural panel lines.

Steps 12 and 13 deal with the main landing gear, but I skipped Step 13 for the moment. The lips of the intakes are attached in Step 14, and Steps 15 through 18 deal with gluing together the vertical tail and all the various flaps and slats. Again, pay attention to the instructions because you have to remove certain tabs for the flaps to be down or up. Also, there are two options for the lower front part of the vertical tail for either the prototype or the production aircraft. The tail is then attached along with the horizontal tail surfaces and the flaps and slats.

The nose is up next and I added a little more weight to the nose cone just to be sure I didn’t have a tail sitter. There are more options here if you are building either the Israeli version or the prototype. The next couple of steps deal with all of the attennas and things like that, of which there are plenty! I left off the clear parts D3, D4 and D6 until after painting. The sprue attachment points for A75 were on the side of the part, which made them a little difficult to clean up, but that is a very minor nit. All in all, the sprue attachments were in logical places.

I decided to pose the airbrake closed because that is how I saw most of them displayed when the aircraft is sitting on the ground. However, when I test-fitted the part, it fit so snuggly that I couldn’t get it out. That would have been OK, but it sat just a little lower than the surrounding fuselage. I tried to use some tape to pull the part out, but to no avail. So I just decided to run a little Tamiya thin cement around it and after the glue was dry I sanded the surrounding area down a bit to make it more flush. I’m still not happy with it, but moved on.

I chose to do the Israeli version, partly because it was a single color, but mostly because of the flying tiger on the tail. The only FS35237 paint I had on hand was from the Model Master Acryl range, which I have had mixed results with. However, I was lucky this time around and the paint performed nicely. I sprayed the nose, anti-glare panel and top of the tail with Tamiya NATO black. After a coat of Pledge Revive It, the Cartograf decals went on beautifully with a little help from Micro Set and Sol. There was a minimum of carrier film on the decals, which was nice. There were a lot of stencils and putting them all on took a few evenings. There are several exploded views of the fuselage and pylons to help with placement of all the stencils.

I gave the airframe a coat of Italeri semigloss clear acrylic to give it a little sheen. Then it was time to attach the main landing gear and doors along with all those other fiddly bits that always seem to take longer than you expect. The canopy was a bit daunting for me because I usually have trouble with clear parts. I opted to use the canopy with the explosive cord molded in because I liked the way it looked. There are PE mirrors to be added, along with a clear divider between the front and rear cockpit and rails that go along the bottom inside edges of the canopy. I managed to get it all together using Gator glue and odorless super glue. I had originally planned to display the canopy closed, but it didn’t quite sit properly because of the clear piece that divides the front and rear cockpit. So I went with an open canopy. I was nervous about gluing it in the open position, but when I did a test fit, it just clicked into place and stayed there. No glue required!

Kinetic’s M346 is an awesome kit! I can highly recommend it to any intermediate modeler who has an interest in the subject. The molding is top notch and the fit is excellent and you get great value for your money. It really is an attractive airplane, and one of those prototype birds would really look striking. Many thanks to Kinetic and Lucky Model for the chance to review this fantastic kit!

Bottom Side
Previous Next