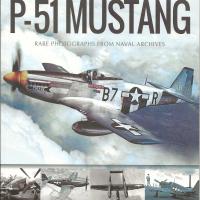 The P-51 Mustang. An icon of WWII held in the same esteem as the Spitfire, Thunderbolt and Hurricane by enthusiasts and historians alike. Aviation historian martin W, Bowman has compiled a wonderful album of photos of all marks that saw combat, from the P-51A to the F-82G.

Some of these photos will be familiar to all, but many are new or have seldom been seen. There are nine pages of introductory text that give a brief overview of the history of the mustang from April 1940 when NAA proposed a new design to the British through its final military service with the Dominican Air Force, last flight of which occurred in 1984.

Each of the photos has a fully informative caption giving the needed information. The only “funny” thing is on the cover it advertises “Rare photographs from Naval Archives” which is corrected on the inside cover page where “Nava;” becomes the far more accurate” Wartime”!

There are many interesting photos. Aircraft of aces, wartime combat damage, in flight, formations, this book has it all! A feast for the yes for sure.

I recommend this book to anyone with an interest in WWII aviation, WWII and Korean war aircraft, WWII and Korean War American Aircraft as well as the modeler; all will find something of interest in these pages. The photos contained really make this book worth the price. My thanks to Casemate for the review sample and to IPMS for the opportunity!