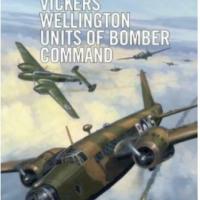 If not for the continued support of companies such as Osprey, IPMS USA would not have the excellent review opportunities we do. Thanks very much to our stateside distributor of these great books, Mr. Wellington. Was not he the guy who’s Army someone else’s’ Army, named Napoleon, at Waterloo? (Answer: yes) And where is “Waterloo”? (Answer: Belgium). I’ve seen that battlefield from both the air and ground (flew over it in an H-53C in a typical European Rainstorm) and it’s not very big as battlefields go. And not once did I associate it with a bomber. Until I put two and two together and got seven (new math). Oh, and it’s not a set of waterproof rubber boots (“Wellingtons”, or “Wellies” as the Brits call them) either.

Fast forward to 2018: Airfix releases a really GREAT Wellington… and then this book shows up. I have always liked the Wellington, and when I learned RAF Mildenhall (my first European posting) was home to the first RAF bombing raid on Germany in WWII, and interest to this Geodetic framed wonder was cemented.

This book follows the standard methodology for Osprey; a great subject, well researched, with excellent period pictures. Janus Swiatlon, a new name to me, is the illustrator for the profiles; and of course Mark Postlethwaite was commissioned for the cover painting. The book cover showings Wellington Mk1a’s of 9th, 37th, and 127th squadrons on an unescorted daylight raid being attacked and savaged by Me-110’s from II JG76 squadron. This painting shows one detail I have not seen illustrated before, and that would be the “dustbin” (trash can to yanks) lower gun position extended on the aircraft in the background… a detail rarely seen in operation. The fact is Me-110 and ME 109 defenders shot down 10 of the bombers, and damaged two more to the point of non-repair. Of 20 initially sent out, the eight remaining aircraft in what was later known as “The battle of Heligoland” served as the impetus for the RAF to switch to night bombing raids for improving the survival rate for the crews and aircraft.

Written by Michael Napier, (a former Tornado Pilot and now airline “driver”), this book draws on the experiences and anecdotes of actual combat records from Bomber Command’s files. Profiles, interesting historical facts, and period pictures form a mesh of total enjoyment; I had to read the book several times to notice details I would otherwise overlook. Check the pictures to see what’s inside; I won’t read the book to you here, that’s for YOU to do.

Ok ok, I’ll describe the pictures. First is an excellent image of a Vickers “K” gun protruding from one of the side defensive window ports. I have never seen any decent photos of weapons on the side of the “Wimpey”… great reference. Second, this image shows two Wellingtons taking off directly in front of a crowd of onlookers at Evere Air Base just outside of Brussels, where they were participating in an air display memorializing the 25th Anniversary of the Belgian Air Force. No distance from the crowd regulations present back then…

A third image shows some of the profile views of over 30 different units flying the Wellington, including training squadrons. These illustrate the variety of roundels, unit identifiers, and painting options as they changed over the years.

The last Image shows FLAK damage to a Wellington: the robust and “All parts support the aircraft, even when major damage is Incurred” nature of the design. No report on Wallis’s impressive Geodetic structure would be complete without such photographs.

A full 10 of 10 on this readers’ scale, thanks again to the Author and contributors in developing an excellent reference book, and thanks also to Osprey for providing us the opportunity to review it!