Origins and Evolution: Boeing B-47 Stratojet & B-52 Stratofortress 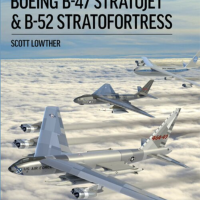 “The famous B-52 Stratofortress has been in service with the USAF for more than 65 years and its iconic shape is known and recognized all over the world. Yet the B-52 and its predecessor, the B-47 Stratojet, started out looking very different indeed. Each aircraft was the product of a lengthy design process which saw numerous configurations studied – with plenty of diversions taken and missteps made along the way.

In Boeing B-47 Stratojet and B-52 Stratofortress: Origins and Evolution, aerospace engineer Scott Lowther reviews and explains the many different projects put forward for these two iconic aircraft, including a wide variety of rare and forgotten designs.

Providing full-page diagrams, a wealth of new artwork and accurate data, the book will be useful for model makers interested in new and unique projects, aerospace engineers curious about the process of design evolution and those interested in these fascinating aircraft.”  This is simply a book of designs and drawings (a few in color); it is not book of photographs (i.e. none).

As an aside, I’ve grown up in the ‘Boeing City’ for much of my life since my family relocated to the Seattle area in 1949—so I have long been influenced by the Boeing Company.  I was interviewed for a position with Boeing as a ‘management analyst 1966, only to learn that the interviewer could not even describe the position, but he assured me I would have a clipboard and really enjoy the Boeing culture.  Down memory lane once again……..

This book is literally a book full of conceptual notes and line drawings, I could not find a single photo since both the B-47 and B-52 family of aircraft were clearly ground-breaking aircraft of the jet bomber evolution.  Allow me to restate this entire book’s format:  aside from a few color images (including the cover) its sole purpose is to discuss and outline the many aircraft based on the very successful B-47 Stratojet and B-52 Stratofortress airframes.  It accomplishes this using both narrative text and scaled line drawings.

From my vantage, it far exceeds my expectations.  I was first amazed to see the vast number concepts presented throughout this large book.  For example: the Boeing Models 464-245 and -246.  The author presents four concept drawings and two-color drawings to illustrate its relative shape and comparative size with the B-52 and B-58 in discussing the need for large aircraft to solve the need for inflight refueling and even enlarging the fuselage to provide for increased cargo carrying capacity.  Interestingly, there is a definite design shape to the -246 which appears to be very similar to the B-744 nose years later in that design (pp 205-210).

Two of the concept aircraft that caught my attention were the notes and drawings for the JB-52E and the Flashback models.  The JB-52E was the very large diameter engines which provided the engineering and developmental work for the commercial 747 programs as well as the Air Force’s Lockheed C-5 and later McDonnell Douglas DC-10 programs.  This aircraft flew from the late 1960’s until it’s retirement in 1981.  The later was a redesign of a B-52C, the ‘Flashback Test Vehicle.’  The later was a highly classified program following the Limited Test Ban Treaty and the testing of nuclear weapons following the treaty.  Numerous aspects of hardware, ballistics and electronics were tested as illustrated in the accompanying drawings, which project a 1/72ndscale drawing of one such nuclear weapon including its Mark 6 re-entry vehicle from a Titan II ICBM.

There are also numerous discussions and concept drawings of both Convair, Consolidated Vultee, Douglas and Northrup aircraft.

My favorite discussion though was about the B-52 development itself, beginning with the Air Force’s “letter of intent” in March 1951 with the two prototype XB-52, Model 466-671.  The initial ‘bicycle’ landing gear had been a very unusual approach taken with the B-47 and carried through in larger scale on the XB-52.  One can tell from the extensive discussion about the early development with the XB-52 revolutionary thinking and design engineering were employed throughout the Boeing program.

My thanks for this review book to Casemate Publications, Mortons Books, and IPMS/USA for my opportunity to read and review it.  I thoroughly recommend this book for scale modelers as well as those interested in the developmental history of the Boeing Company.