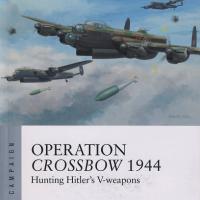 Operation Crossbow was the Allies attempt to destroy Hitler’s new Vengeance weapons, the V-1 and V-2. This book focuses on the bomber campaign rather than the defenses deployed in England to counter the attacks.

The usual soft cover book consists of 94 pages filled with Mr. Zaloga’s usual well documented and written information. There are lots of photographs of not only the allied attacking aircraft but also the German weapons and their launch sites. The photos are supported by some colored artwork, drawings, diagrams, and charts and tells the story in a fitting manner.

The book contains an Introduction and Chronology chapters before giving the Attackers and Defenders Capabilities. The Campaign Objective is followed by the bulk of the book in the Campaign chapter. An Analysis and Conclusion chapter finishes off the format.

Crossbow was developed to protect the capital of London which was the main target. To do that the Allies used the RAF’s Bomber Command and 2nd Tactical Air Force along with the US’s 8th and 9th Air Forces. The campaign itself was split into two main Phases. The first phase was mainly attacks against the V-1 launch sites located within striking distance of London while also hitting some of the heavy bunkers and storage sites. Phase 2 focused more on destroying the enemy’s ability to make the weapons and to get them to the launching sites.

I enjoyed this book and really liked all the information and photos regarding the V-1 sites as I have plans to build part of one at some time in the future. This book will be a great help in that endeavor.

Thanks to Osprey and IPMS/USA for the review sample.