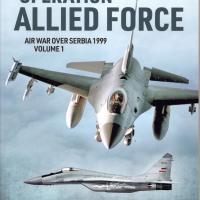 This book “Operation Allied force, air war over Serbia 1999” is volume one of a two volume book series. There are two authors who both held opposing positions during this war with front line service. This volume (1) covers the chronology of events while the next volume (2) focuses of the experiences from both sides in the air war.

The beginning of this book covers the rise of the Federal Republic of Yugoslavia (FRY) air force. From buildup of assets, restrictions put on the new air force equipment and tables showing air asset with locations of these assets. Deeper into the book, it covers conflicts, notable air engagements, buildup of NATO forces and defenses.

All through the book, there are mostly color photographs of the aircraft, personnel and supporting equipment proving great reference photos for a modeler’s perspective. In addition to aircraft, there are photos of radar and defensive equipment used in the air war. Several targeting photos show pre-strike and post-strike images on the ground. “order of battle” maps and numerous maps show the extent of the air war and where assets were located and battle routes.

In addition to all the actual photographs, there is a large section of color aircraft profiles for both sides. A lengthy description accompanies each profile image. Each section painstakingly covers events from both sides and details. One photo shows a discarded BLU-114 “graphite bomb” casing dropped by a F-117 onto a power station.

This book gives an in depth and precise account for the air war over Serbia from both sides. The stories are fascinating to read and will give most people a new perspective of this short conflict. The reference material will help a modeler correctly depict their subject build to make the most accurate model possible.

I would like to thank Casemates and IPMS/USA for this book to review.