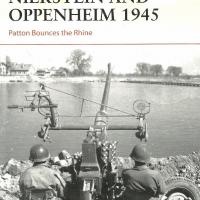 In January 1945, the collapse of the German front along the Siegfried Line led to a large-scale dissolution of German combat forces and capability. Pressed hard by Allied forces advancing eastward, German units often found themselves trapped west of the Rhine River. With his eye on history, US Lt. Gen. George S. Patton, Jr. was determined to be the first leader since Napoleon to make an assault crossing of the Rhine. The most logical crossing-place was at Mainz, as it served as a major railroad logistical link from west to east. However, Patton was aware that this would be obvious to the Germans, and therefore he and his staff made rapid plans for another site at Nierstein and Oppenheim, about 12 miles south of Mainz.

The crossing began at 2230 hours on 23 March, when the first boats carrying 11th Infantry Regiment troops left the western bank of the Rhine. They met with little opposition; despite a few sharp counterattacks, overall resistance was light and American forces suffered few casualties. By 24 March, the US 4th Armoured Division under Brig. Gen. William Hoge crossed the Rhine and began the exploitation phase. By 26 March, the exploitation to the Main River was clearly a rout, exacerbated by additional crossings of the Rhine by other Allied units over the next few days. Illustrated throughout with stunning full-color artwork, maps, and bird's-eye-views, this title details the complete history of this campaign.

The book is 95 pages and has great black and white photos, color maps of the areas of the campaign and is divided into the following chapters

Some sections in the book give information about opposing commanders, not only American and German, but also opposing American Generals against themselves and actions they took to be the first to Germany.

One section talks about the specific rivalry between Lieutenant General Courtney Hodges and Lieutenant General George Patton, and their run across Germany. Mostly what I have ever heard about a Patton rivalry was with Montgomery.

If you are a history buff and are interested in information about the battles associated with the American Army crossing the Rhine river, this book goes into very fine details. There are color maps in the book of how the offensive took shape for different campaigns and eventually crossing the Rhine.

Logistics were a Staff headache for the crossing of the river and are covered extensively and could be a book all on its own. American logistics staff were far more superior in the handling of real world, long distance movement of equipment and personnel while the German logistics staff were more experienced at handling tactical matters. Staff can make a mediocre commander look brilliant.

For me this book was an interesting read. Once again reviewing books gives me a better understanding of the events of World War 2. I want to thank Osprey publishing, and IPMS/USA for the opportunity to read and review the book.