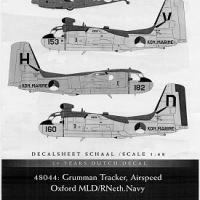 Dutch Decal has released this decal sheet in 1/48 scale to coincide with their excellent book on the Grumman Tracker used by the Royal Netherlands Navy. The sheet also gives modelers a chance to do something a little different with their Kinetic S-2 kit. There is also an option provided on the sheet for a single Airspeed Oxford, which the Royal Netherlands Navy used in 1947. Special Hobby has recently released a kit of the Oxford in 1/48, so now I suppose I will have to buy one of those.

There are two sheets, with one composed almost entirely of numbers in black and white. This should enable the modeler to do just about any of the 45 Trackers that were used by the MLD. However, there is only one set of national insignia provided, so you will only be able to do one of the aircraft. There is also a full set of stencils provided for one aircraft. The very prominent wing walk area is also provided as one large decal. The kit also provides the same decal, so I will probably opt to try that one first, just because I am assuming it will be more accurately sized to fit the kit. At least I will have a backup in case I screw one of them up! Some of the aircraft featured a grey wing walk area, and Dutch Decal has announced that they will be releasing a supplemental sheet providing that decal.

The instruction sheet is an 11x17 sheet of paper printed on both sides and folded down to 5.5”x8.5”. It is only printed in black and white, but the color schemes are all basically the same. The MLD received 28 S-2s from the US, which were painted Extra Dark Sea Grey over Sky. They also received 17 Canadian-built CS-2s which were painted Dark Sea Grey over Medium Sea Grey. The demarcation line on the CS-2 was slightly higher than on the S-2. The Oxford option is for an overall grey machine. The instructions quote either Dark Sea Grey or Extra Dark Sea Grey. Apparently a little more research is required on the part of the modeler to determine the correct color.

I have used Dutch Decals before and can attest to their quality. They are very durable, which is a plus for a modeler of my ability, but they conform very well to surface detail with a little help from Micro Set and Micro Sol. The color density is very good, and the registration looks to be right on the money. If you want a something a little different for your Stoof, then this decal sheet might just be the answer. I recommend this sheet for anybody who has an interest in the subject.

Many thanks to Dutch Decal for the sample and to IPMS/USA for the opportunity to review this decal sheet. I am looking forward to using them.