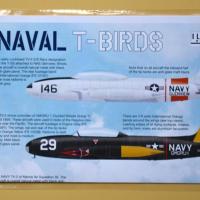 A recent addition to Iliad Design’s line of 1:72 scale decal sets is one covering a variety of US Navy and Marine Corps Lockheed T-Birds. Markings are provided for five aircraft. This set actually includes scaled down versions of the four subjects found on Iliad’s 1:48 scale Naval T-Birds set with a fifth one added.

In his review of Iliad’s 1:48 scale set, Charles Landrum commented that Iliad earned his respect for releasing decal sets for subjects off the beaten path…in that case, for Navy and Marine T-Birds when only one kit exists in that scale to build a T-33. By releasing a 1:72 scale version of that set, Iliad provides modelers with decals that offer these unique markings for a number of kit options…the older Heller and Hasegawa ones or the more recent Sword and Platz releases.

The set provides markings for:

All national insignias and individual aircraft markings necessary for each aircraft listed above are provided on the decal sheet along with intake warnings, rescue placards and cockpit release symbols. Small airframe stencils are not included. It may be possible to glean some of them from a kit’s decal sheet.

Iliad decals are well printed and are of very high quality. Registration is exact and colors are vivid and opaque…and appear to be quite accurate. Everything is printed on thin film that I have found will respond well to mild setting solutions such as MicroSol and Gunze’s Mr. Mark Softer. There is minimal carrier film surrounding each printed image but it still is advisable to apply the decals on a smooth glossy finish and use a setting solution to avoid silvering.

A double-sided, full color instruction sheet is included that provides modelers with a port profile of each TV-2 or T-33 (with appropriate aircraft and unit information) and overhead views of each aircraft, with under wing marking locations indicated in lightly ghosted colors.

Iliad decals can be found at a number of full service retail hobby shops and on the Internet. However, they also can be easily sourced directly from the manufacturer at the website noted above. The website also provides a list of retailers who stock Iliad’s products.

This decal set is highly recommended. My thanks to Illiad Design for supplying the review sample and IPMS/USA for the opportunity to review it.