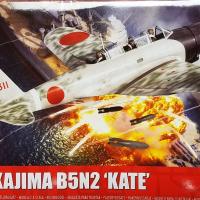 The Nakajima B5N2 'Kate' was the most numerous Japanese torpedo bomber of the Second World War, and while primarily operated from carriers, it also saw service as a land based bomber. A single engine monoplane, it was defended by just one rearward firing machine gun, operated by the radio operator, and its relatively low speed left it vulnerable to enemy fighters. Kates performed well at Pearl Harbor and went on to have success during the early battles of the war.

Airfix’s B5N2 is a newly tooled release of a 1/72 Kate. Further versions based on the same kit will follow (a B5N1 is already announced). The kit comes in the standard Airfix , top-opening box, with a glossy image of a Kate over Battleship row and the USS Arizona during the Pearl Harbor attack. Decals are included for two marking schemes: E1-311 from the IJN Shokaku in 1941 (Pearl Harbor attack) and 553 Kokutai in 1944. Besides markings, options also include landing gear positions, open or closed canopy, raised or lowed flaps, and folded or extended wings. The kit is molded in the standard Airfix soft, light blue plastic. Sprue gates required some delicate sanding, especially on the wingtips. The clear parts are crisply molded, but the fuselage inserts (for the sides and floor) were somewhat cloudy. The canopy was molded with no opaqueness. Panel lines are heavy, especially for this scale.

Prior to assembly, the builder must choose between folded and extended wings. I chose to go with folded, as I thought it would add uniqueness to the model. Both upper and lower wings must be cut through, and Airfix provides a nicely recess line on the inside of each wing half. Just a few minutes with a razor saw did the trick. I was surprised how simple Airfix made this option.

Assembly starts with the cockpit, the floor of which is molded into the one-piece lower wing. Details are abundant for a 1/72 scale model, and several instrument decals are a nice addition. There is no seatbelt or seatbelt decal. Once the top wings are added, the fuselage halves go together, after which the wing and cockpit arte added from the bottom. The fuselage to wing join was excellent, but some filler was needed for the wings and fuselage themselves. The wingtips and trailing edges are pretty thick; a good option would be to thin those through careful sanding.

Control surfaces are separate, and the landing flaps can be posed up or down. I chose to show them in the down position. The engine has separate rows of cylinder banks, and a separate exhaust ring is a nice addition. I drilled out the end of the exhausts. Cowl flaps can be open or closed. The landing gear are simple, but fit snugly in to slots in the wheel wells. I chose to go with the open canopy option. Masking the tiny canopy parts was tedious, and would be more so for the closed option. It would be worth considering an aftermarket painting mask for this.

Color callouts are in Humbrol, and other than the exterior colors, there is no reference to clarify the name of colors. I went to the Humbrol website to get a color name for the appropriate numbers. I used Mr. Color for the painting, followed by a coat of Future. Decals went on well, although the carrier film is a little thick. Everything was sealed with a coat of Alclad Matte. The final, and trickiest, part was setting the wings in the folded position. The wingtips are held up by a very fragile brace that attached to the fuselage side.

Overall, the plastic fits very well, and builds to a nice model of an important aircraft. Detail is very good for the small scale.

Thanks to Airfix and IPMS for the opportunity to review this kit of an iconic ship.