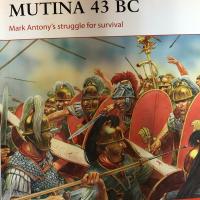 So, before we get into the specifics of the book. Here is a little about the author and illustrator. Dr Nic fields is the author of this publication and many others so he is not a stranger to the osprey family or to my memory. He’s a veteran of the Royal Marines, biochemist and historian so I guess you could say a jack of all trades. He does a lot of his research writing and editorials freelance.

Peter Dennis is another star contributor of the Osprey book family and is a graduate of the Liverpool art college. He’s has illustrated hundreds of books and I have quite a few examples of them , a sharp eye for accuracy and consistency your not going to find a bigger name than Pete when it comes to the historical art community.

Here we breakdown the contents of the book.

So, for starters we all for the most part know the Demise of Julius Caesar at the hands of his most trusted confidants, what a lot of people probably don’t know is the downward spiral and eventual end of the Roman empire this assassination brought forward. This book goes over two very important time frames, the Death of Caesar, the after effect of his death and last, the struggles of the roman state.

During the periods leading up to his death Marcus Brutus and his supporters believed at the time they was not only saving the very idea of what was Rome but saving Caesar from himself, who they believed was eventually going to stop resisting the title of “rex” or King and absorb more power than he already possessed which at the time was very immense due to his win of the civil war of Rome he created. Cicero on the other hand proposed amnesty for all involved in his eventual assassination. As we all know Caesar proved to be just as controversial in death as he was in life, his funeral caused riots, the conspirators where sent fleeing their home lands and into exile.

Marc Antony’s army did not differ much from the Senatorial army outside of the main differences of divided loyalty, seeing as this was mostly an internal conflict of the Roman state a lot of the Weapons, tactics and doctrine was similar to both sides and neither had a distinct ‘advantage’ over the other.

From reading this book its clear it does skim through an abundance of in-between fill in the gap moments and kinda gets through to the end in a nutshell. You will learn a little about Marc Antony’s army against the other roman states but seeing as this was a civil war most technology and weaponry was the same between the states and regions. Revenge, anger, greed all played into the ultimate demise of Rome, Mutina was just another killing blow in its death.

I love anything Greek and Roman history related and this book did not fail, if you want a great read to help fill in the blanks then this book will not fail. It provides pivotal insight into the minds of cicero, the senate, mark antony, marcus brutus and the adoptive heirs of caser. If you want a by date timeline I will tell you this is not one of those types of books this is not the one for you, if you want one that helps with the understanding what happens after Casers death this is the perfect read for you.

I want to than IPMS and Osprey for the opportunity to review this book. I love learning and reading and this made a perfect companion for current overseas travel. Thank you all so much for the great read!