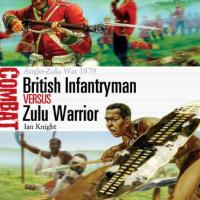 This is the third book in the new Combat series from Osprey which looks at soldiers who faced each other in battle. The Zulu War of 1879 has long been a subject that captured the imagination of military historians and modelers. Numerous books on the subject have been written, including several by Ian Knight, the author of this book and one of the leading authorities in the world on the Zulu War.

This series follows a similar format in all the books, looking at subjects such as training, morale, weapons, and leadership. The book compares the fighting styles and tactics of the British and Zulus in three very different battles – Nyezane (22 January 1879), iSandlwana (22 January 1879), and Khambula (29 March 1879). Accounts from combatants on both sides are included.

Besides the period black and white photos and artwork, there are color maps, color photos of the battlefields as they appear today, and weapons carried by British troops and Zulus. Illustrator Peter Dennis has done some excellent panoramic paintings of the battles as well as full-page illustrations of both a British infantryman and a typical Zulu warrior.

In the end, it was the firepower and might of the British Empire that prevailed, but the Zulu warrior remained a courageous foe. When retreating from the battlefield, many Zulus were chased by British cavalry. The warriors turned, faced their enemy and baring their chests, said “We have shown you how we fight, and I’ll show you how we die!”

This is a great book for those interested in the British Colonial War period or military history in general. Thanks to Osprey Publishing and IPMS/USA for the opportunity to review it.