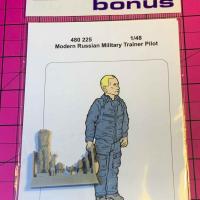 Aires began in 1995, making 2020 their 25th anniversary. They are based out of the Czech Republic and include not only the Aires brand name, but QuickBoost, Aerobonus, and Wheelliant.

A perfect addition to your diorama or display base is this Aires Aerobonus figure. This Soviet Pilot figure is designed to be used with any modern Russian trainer aircraft (Aero L-29, Aero L-39, MiG-29, MiG-AT, Su-24, Su-25, Su-27, Yak-130, Yak-152, etc.). Aires Aerobonus provides you with a resin figure with separate arms, a helmet, and two heads (Cap and No Cap) on one pour stub with side bars to protect the figure. Of note is the re-sealable packaging that Aires Aerobonus uses that makes the parts easy to checkout before assembly and painting and then stuff back into the package securely. The supplied instructions provide color drawings for painting.

Aires Aerobonus has molded the figure in light grey resin with no bubbles that I could find. There are mold seams on the heads and there is flash apparent on the body, especially between the legs, that will take you a bit to clean up. The resin sprue is easily removed from the shoes with a razor saw. The arms were attached with superglue. I added a just a touch of putty to refined the transition on the shoulders to the arms. Be careful with the arm holding the helmet chin strap as one side of the strap disappeared rather quickly. The head is currently attached with Future. The sculpting is great with the proportions of the figure perfect. The jacket and pants are well executed with appropriate wrinkles and folds.

I was particularly impressed with the molding on the helmet. There is a tremendous amount of detail that has been added to replicate the actual Russian pilot helmet. One watch out: The helmet straps are molded with the left hand. I managed to lose the diminutive front strap rather early on in painting and the rear strap later on before super gluing the helmet to the leg. The rear helmet strap I was able to locate, but the front helmet strap has disappeared. I ended up using a very short piece of Evergreen 0.020 rod, carefully flattened to a flat profile with a sanding stick.

Although most paints will adhere to resin alone, I would recommend that you wash the parts to remove any remaining mold release and prime them first. I primed the figure with Vallejo light grey, and then followed up with additional Vallejo paints to match the colored illustration in the instructions. I followed that with Tamiya’s Panel Line Accent Color in Grey, dark brown, Pink Brown. This was followed with some Vallejo Model-Air dry brushed in some highlights. Somewhere along this process, I began to notice that the pilot figure looks a bit like Russian President Vladimir Putin. You may also notice that the Russian trainer looks oddly like a MiG-31. My guess is that if Vladimir Putin wanted to fly in the MiG-31, a way would be found.

Thanks to Aires Aerobonus and IPMS/USA for the opportunity to review this set.