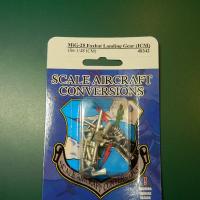 We at IPMS continue to thank Ross and his Team at SAC for supporting the IPMS USA reviewer corps with what has turned into a monthly release schedule with extremely useful and well-thought out landing gear additions for the modeling crowd out here in the modeling world.

This review is for the SAC landing gear released for the relatively new 1/48 ICM Mig-25. As to the basic kit, it is well designed and accurate BUT also is not for beginners; a lot of locations are vague on where parts should line up, and I have struggled with the afterburner/augmentor petals, and the overall assembly of the basic fuselage.

A bit of misalignment during side panel and top fuselage installation will result if the fumble-fingers among us (like me) having more than a few blue clouds riding overhead with special language inserted. The landing gear is no different, as the angles and installation are to be expected to cause grief. It gets done, but prepare yourself mentally and lay off the adult beverages while trying to line everything up.

SAC provides 9 metal parts to replace the kit-supplied plastic landing gear. The landing gear can be installed after basic fuselage assembly, which will help with painting later.

I began with the nose gear, which provides a strong, single-piece nose gear capable of handling the weight of metal and resin upgrades… For example, when I mention resin upgrades, I refer to (in my case) those who like resin nose corrections, resin cockpits, Etc. as I am using on this build. The single-part Mig-25 resin nose improvement from Cold War Studios will be subject of a later review.

Out of the package, SAC once again provides a direct replacement for the kit landing gear. On examination, the kit gear is simplified but accurate, as befitting Soviet design philosophy. SAC’s gear copies this in their trademark white cast metal; the shiny surface is ready for primer without additional work; my sample had no seam to scrape off, and the molding was flawless.

The kit-supplied main gear have two-part lower strut halves; the SAC gear improves this by providing a single strut affair, which is then offered up to the upper strut and trunnion mounting frame. Retraction rams are attached and the assembly is complete.

The nose gear leg drops into the existing mounting hole, which makes for a strong and durable assembly. The drag link is attached to the forward housing and the gear and this section is then complete.

Pictures as usual tell the story of a relatively simple but durable enhancement to the kit. The only area requiring real attention was cementing the upper trunnion assemblies in place, which requires one to pay due note of the toe in and tracking/rake of the wheels to the fuselage centerline. You CAN assemble the gear improperly, which results in a “guy with a straight broken leg and crutch” look as is so frequently noted on ME-109 and P-51 builds. (Anyone else bugged by this but me?)

As usual the strength of the gear came in to play; it is worth the extra cost for kit longevity; the metal takes the place of the plastic with ease, and it holds up the model without complaint. A full “10” Score set… thanks again to Ross and his crew for working with us at IPMS USA!