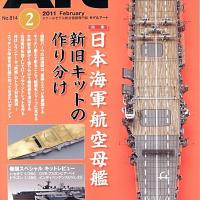 Model Art magazine is a very well known model magazine from Japan. It seems to do well selling here, even though it is written completely in Japanese. They really do believe in the saying “a picture is worth a thousand words”. There are so many wonderful pictures in this magazine that you can really tell what is going on.

The magazine is 7 1/8 inches X 10 1/8 inches and is printed on glossy stock. Most of the pictures are in color and also a lot of black-and-white, toward the back. This magazine looks more like a trade paperback than a magazine, and it has a superb binding. No pages falling out here! This book is built to last for many projects to come.

It’s divided up into sections that seem to cover all of the major kits, airplanes, armor, cars, and ships. This issue has a special review on CVE-73 Gambier Bay and CVL-22 Independence and there is a large feature on other aircraft carrier kits and some diorama setups. One thing I really enjoyed was the way that they showed replacement for conversion pieces. The kit is shown with an arrow pointing from the comparison part to where it is replaced on the kit with a circle.

Here is a list of the main featured new kit reviews:

After these 7 main reviews there are just loads of other smaller reviews with black- and- white illustrations and photos.

There are really a lot of advertising pages, and I’m pretty sure that you could get almost anything in them from Hobbylink Japan. I really recommend this magazine, if not for anything else than for the awesome photos. They do tend to show a lot of close up details that can help you when you’re hunting for that picture that will show just the right angle that you need to get a certain antenna or fairing right.

Thanks to Model Art and Dragon Models USA as well as IPMS USA for the opportunity to enjoy a really well done magazine.