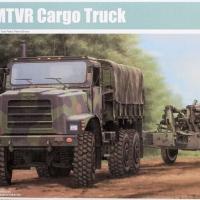 The Medium Tactical Vehicle Replacement (MTVR) cargo truck was adapted by the U.S. Marine Corps and U.S. Navy as a replacement for the M939 series of trucks that had been in use since the early 80s. It offers improved off-road capability and greater capacity than the earlier models. It is the prime mover for the USMC M777 Howitzer and is used to carry troops, cargo, fuel, and water to every corner of the battlefield.

The MTVR was first fielded in 1998 and is built by Oshkosh Industries. Deliveries are continuing, and so far some 11,000 in 12 different variants have been delivered to the US Marines, the Navy Seabees, as well as the Iraqi and Egyptian armies. The variants include 4x4 and 8x8 versions, along with the standard 6x6 configuration.

This kit represents the standard cargo version of the MTVR. Trumpeter seems to have really hit its stride with the production of their series of high quality kits of modern military transportation vehicles. The kit has 430 parts in a soft light grey plastic arranged on nine sprues. There is one sprue of 11 clear parts and a photo etch fret with 31 parts. There are six rubber-like tires and the hood, cab, and cab floor are packed separately. There are decals for two vehicles, along with a bunch of little warning placards and other clutter. There is a nice instrument panel decal as well. All the parts are well-packed and protected for their long boat ride from China.

The kit does not have any representation of an engine, again typical for Trumpeter truck kits. It is also lacking any attempt to represent the cargo compartment cover or bows. This kit does have one feature that I had never encountered before: the inclusion of a coil of soft copper wire and a jig to make 20 cargo cover tie-down hooks. One has to admire the ingenuity of the Trumpeter engineers in coming up with this scheme, but it also makes one wonder if they forgot to include the tie-down hooks in the kit and quickly redesigned one sprue (for the jig) and threw in the wire as an afterthought. The Trumpeter M1083 FMTV truck kit I reviewed a few months ago had plastic tie-down hooks, and they seemed to look convincing enough. Although making the hooks is not difficult, it is a tedious and time-consuming process that hardly seems worth the effort.

Basic construction starts with the frame. The kit is well-engineered and everything fits with admirable precision. However, as I discovered to my embarrassment, it is entirely possible to put parts on upside down. I did that with the very first two parts I put together. I was interrupted at that stage, and did not get back to the kit for a few hours. Tamiya cement will dry very thoroughly in a few hours. I was able to wrench the parts apart, but it drove home a lesson some of us seem to have to relearn frequently – study and follow the directions carefully.

The frame and suspension are very complex and make up almost half of the total construction steps. This truck is a 6x6, and with its unique six-wheel independent suspension, you have a lot of nearly identical assemblies to deal with. Follow the instructions; DON’T TAKE THE PARTS OFF THE SPRUES UNTIL YOU NEED THEM!!! There are lots and lots of itty-bitty parts that look much alike, but they aren’t. Each of the suspension units has 47 parts. It looks as if everything that is on the real truck is reproduced in the kit. I have built 1/72 airplane models with fewer parts than each of these suspension units.

At this time I gave the model its first coat of Model Master Army-Marine Desert Sand. Subsequent steps will cover some of the construction already completed. To ensure full paint coverage of the semi-hidden areas, I decided to paint it in steps as I went along. I also painted the interior parts of the cab at this time. Military vehicles are generally painted all the same color at the factory, and that color is normally some shade of dark green. The Trumpeter instructions for the temperate color scheme version call for Model Master FS34102 Medium Green as one of the camouflage colors. There are no instructions regarding the painting of the interior or other details, so in the absence of any better information, I painted the interior that color. It seemed unlikely to me that the Marines would have painted the interior of the truck a light sand, as that would have made the interior highly visible to anyone with hostile intent.

I continued with the chassis, adding the various fuel tanks, boxes, blowers, and mysterious round things that make up the underpinnings of this very complicated-looking vehicle. These steps are where you first encounter the photo etched brass parts. The kit gives you alternative plastic or brass parts for some of the assemblies, and I chose the brass in every case. The brass stock Trumpeter uses is quite thick, and some sort of brass bending tool is extremely helpful. This is because the thickness of the brass makes it tricky to bend, and it has some natural springiness that makes the one circular part (an exhaust pipe guard) hard to bend and hold in place.

The cab was a piece of cake after all that. Now is where all that pre-painting of the interior parts pays off. There is a nice instrument panel decal. The molded instrument panel has nice detail on it, so the decal may seem redundant to some, but applying it is easier than painting all those dial faces. The decal snuggles down well with the usual chemical inducements (I use Solvaset). You also have numerous small warning signs and placards that go on the inside of the doors. I rather liked the look of them, so I cemented one of the doors ajar so all that detail could be seen.

The one part I had the most trouble with was installed at this stage. That was the exhaust stack and its associated photo etched guard and the connector pipes. Again, there are no detail color directions, so by studying the camouflage color painting that came with the kit and various photos on the internet, I came up with metallic black – Model Master Gunmetal. The exhaust connector pipes I painted Model Master Burnt Iron. The exhaust stack attaches to an exhaust pipe that fits under the passenger-side access ladder and disappears into the fender well. You have to wrap the exhaust pipe with the photo etched shield. Unfortunately, the shield is an odd shape, and resists easy attachment to the exhaust pipe. By using multiple clamps, a rubber band, and what seemed to be a half-gallon of superglue, the shield became attached to the exhaust stack. Although the instructions are clear as to where to put the completed assembly, the exhaust stack has two small plastic lugs that fit through the shield and are meant to hold the exhaust stack to the back of the cab. They provide insufficient surface area to ensure a solid attachment. There is also a small vent pipe that connects the exhaust stack to the snorkel base that was installed earlier. It tries to force the exhaust stack out of position, so you have to finesse it into position again. I am not sure the final result is quite up to Marine Corps specs.

With the cab mounted, the thing is beginning to look like a truck. The hood assembly requires only the attachment of the headlight assemblies and the grille/radiator. The grille and radiator are photo etched parts and also require pre-painting. The grille, which is probably more like a brush guard than a decorative piece, should be the same color as the exterior. These trucks have a radiator or heat exchanger of some sort immediately behind the grille. I would expect this should not be painted, as the thick paint used by the military might interfere with the functioning of the radiator. I painted that brass part Model Master Gunmetal to reproduce the color of the radiator.

For some reason, I had some trouble fitting the hood onto the chassis. On the real vehicle, the hood tilts forward as a unit to expose the engine. This is one place where the prior study of a good reference photo would have been helpful. I fought the hood to make it as far aft as possible while trying to reduce the gap between the hood and the cab. As it turned out, Trumpeter was right and I was wrong. There is a huge gap between the rear of the hood and the cab on the real vehicle; the hood and the fender unit are actually four to six inches apart. I tried to minimize the gap and as a result the hood does not fit on the front mounting lugs, and the tie-down straps were (I thought) too long. Although the model looks OK, it is not right, and it is entirely my fault.

The final major step was the cargo bed. Assembly is quite straightforward, with few problems or surprises. This is where you get to attach all those hand-made cargo tie-down hooks. If you had been making them a few at a time as I did, by now you have quite a pile (the directions call for 20) of these things ready to go. If not, you have some work ahead of you. The kit provides 300mm of .5mm copper wire, although the directions say it is brass. Each hook takes 5 to 10 minutes, and if you have big, fat fingers you are going to be challenged. I thought the wire was too heavy and a little too stiff, and getting 20 uniform hooks was not as easy as it looks. To add insult to injury, the jig started to wear out as I neared the end of the task. I was afraid it would break it in half before I had all 20 (actually 22, the carpet monster got a couple).

The cargo bed fits well and snuggles onto the locating lugs on the frame with only minor persuasion. The final assembly step is the installation of the wheels. I found the wheel attachment points over the brake drums to be very tight, so I lightly carved away some of the plastic from the inside of the wheel assemblies where they slide over the brake drums. Eventually they all snapped into place. With the addition of the decals, a little last minute detail painting and some light weathering, it was done.

I enjoyed building this model. It was a challenge, but still satisfying in that I was able to overcome some problems and produce a model that will be a fine addition to my collection. This model is not for beginners. Even experienced modelers would be tempted to skip all those tie-down hooks. If I had not been building this model for a review, I might have skipped them myself. Another impression is how big this vehicle really is. The final picture shows it next to the Italeri M923 5 ton “Big Foot” truck model I built years ago.

My thanks to Stevens International and IPMS USA for providing the review kit.

Parts explosion from the box

Comparison with M923
Previous Next